by Alison Potter Published on 23 November 2012

Straight after arriving in England last night, the Beckhams headed round to Gordon Ramsay's house for dinner.

David Beckham is thought to still be in Los Angeles gearing up to play his last game for LA Galaxy, while Victoria and her brood of four have landed in London for a mini-break.

The fashion designer clearly wanted to have some tasty grub and a bit of company so she headed over to pro chef Gordon's house, which he shares with his wife Tana.

The British celebrities are all best friends and their kids - the Ramsays also have four children - are regularly spotted hanging out together in the family and friends’ box at David’s football matches.

David and Gordon both relocated to the US around the same time for their careers, which has undoubtedly strengthened their bromance and the families are so close that they previously spent Christmas Day together in Los Angeles. 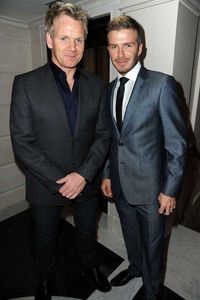 As one of the most popular TV chefs, famed for his notoriously high standards, Victoria, Brooklyn, Romeo, Cruz and baby Harper would have been sure of having a tasty meal at Gordon's.

They also will have avoided forking out a load of money for the food, which they would've done had they eaten at one of The F Word chef’s 13 UK restaurants.

Not that it would've made much of a dent in Victoria's pocket.

Victoria and her kids were wrapped up against the winter chill, although bizarrely the 38-year-old was seen exiting Gordon’s house late at night wearing a large pair of dark sunglasses.

The Beckham kids are growing up to be as stunning as their parents, so it comes as no surprise that Brooklyn, 13, Romeo, 10, and seven-year-old Cruz have reportedly been offered modelling deals with high street fashion brand Gap.

A source recently revealed to Star magazine: “Their kids get better looking by the day.

“Victoria and David aren’t keen on having their kids in the spotlight but Brooklyn seems very interested in being in front of the camera.”

It remains to be seen whether the doting parents will allow their kids to enter into the spotlight, but for the time being the pair are keen that that their offspring continue with their studies.

Meanwhile, David, 37, is currently on the look-out for a new club after announcing that he’ll be leaving LA Galaxy next month.

The football heartthrob has been linked with moves to Paris Saint-Germain in France and the Australian-League.