WATCH Jennifer Aniston's funniest and most awkward interview ever

Radio One reporter Chris Stark has done it again. His last interview with Mila Kunis went viral as he bumbled his way to a successful, laid-back chat with the superstar. And this time he had one-on-one time with Jennifer Aniston as she promoted her new movie We're The Millers.

Jennifer Aniston may not have seen Chris Stark's interview with Mila Kunis - but everyone else did.

The jokey chat - which earned him a fan in Mila Kunis - went viral after he asked her some pretty unconventional questions and spoke to her about his mates.

So, not one to stray from his style, Chris gave Jen a similar treatment.

Whether she was loving it just as much as Mila, we're not so sure - but it still made for some amusing quotes.

He asked the former Friends actress just how she prepared for her role in the racy new flick, in which she plays a stripper named Rose O'Reilly.

She told him: "All my research came from my twenties."

He went on to tell her about his own research into the area.

He said: "Me and my mates went to a strip club in Prague. But it was an odd experience because they offered us a steak meal while the girls danced."

Jen looked rather bemused by his story and asked: "So you were sitting there watching the girls on stage while eating meat? It sounds very caveman-like!"

Carrying on with his 'confuse them into a sound-bite' style, Chris went on to ask about any men she may secretly want to sleep with.

We're not sure if they were both aware of the Friends reference - we all remember Isabella Rossellini on Ross' list.

He asked: "My mates' girlfriends allow them to have five names on a list, and as one of the most famous, hottest women in the world, you are often on that list.

"I just wondered how it works with someone famous - do you have a list of normal people that you fancy, does it work like that?"

Her answer was unsurprisingly a no, and when he went on to ask just what it was about Ryan Gosling that got him so many female admirers.

It was then Jen's turn to remind us why she's such a Hollywood charmer.

The 44-year-old said: "But you kind of have a bit of a Ryan Gosling vibe about you. It's like an innocent, very cute - but there's a lot more going on..."

Visibly chuffed with her comment, he went on to give her a personalised Watford FC football shirt.

Jen looked genuinely pleased with the gift and told him: "Thank you for this - that's so exciting, I think it's really special."

Who doesn't love Jen An? 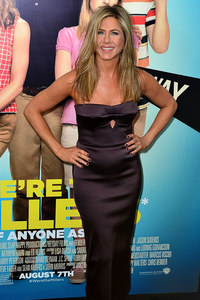 Wanna remind yourself of Chris' interview with Mila Kunis?...