Probably due to how much everyone enjoyed seeing Nicole Richie and Kim Kardashian looking like dorky teenagers in the snap Kim shared on Twitter and Instagram last week, the reality show star has shared two videos of Nicole Richie and her mum, Kris Jenner, acting nerdy together as Nicole attempted to teach Kris how to rap as Kim snickers behind the camera.

Kim Kardashian has shared two videos on Twitter of her mum, Kris Jenner, and childhood friend Nicole Richie, rapping together.

The little group look like they are in a giant walk in wardrobe – one of us, we suppose – as Kris and Nicole bounce around with sideways caps trying to rap to Salt-N-Peppa single, Shoop.

No offence to her, but Kris is rubbish at it, and Nicole continuously giggles as she has to correct her. It’s all very sweet actually – famous people are just as lame as normal people! All of the rumours are true!

They pull off some, erm, ‘great’ dance moves in front of the camera and Nicole shouts “here I go again girls what’s my weakness? Men!” When Kris is prompted to shout “men!’ she muddles the whole thing up, which leads into another video with Nicole perched on Kris’s lap this time as they give the song another go.

It’s nice to see that the girls are still friends with each other after all of this time, especially now that they are both mums with families, as Nicole has a daughter Harlow, five, and son Sparrow, four, whilst Kim of course gave birth to little North West back in June last year.

However, rumour has it that Kim wants another baby, as UsWeekly has claimed that she would like to be a pregnant bride for her wedding. A source told the magazine: “Baby no. 2 is on Kim’s mind. She’s hoping to have a girl next and then a boy…they aren’t trying to note let it happen.”

Oh wow, what on earth would they call another baby? South? East? Are they planning on having a child of every direction? Tweet us @sofeminineUK 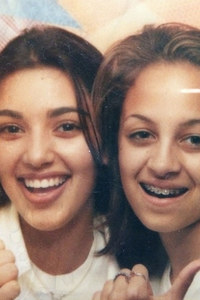