by Alison Potter Published on 5 October 2012

Bucking the trend for stick-thin actresses, gorgeous Mad Men star Christina Hendricks has risen to fame most notably because of her killer curves.

The 37-year-old flame-haired star plays voluptuous knock-out Joan Harris in the hit series and has become one of Hollywood’s biggest pin ups in recent years.

But it would appear that Christina is getting sick of all the focus on her figure rather than her acting ability, as the three-time Emmy-nominated actress has blasted a “rude” interviewer for repeatedly calling her a "full-figured woman".

In the filmed interview with the Sydney Sun Herald, fashion editor Kate Waterhouse asks Christina: "You have been an inspiration as a full-figured woman. What is the most inspiring story that you can remember where you've inspired someone?" 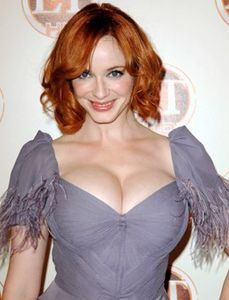 Looking off screen, most likely at her publicist, the frustrated actress waits for the question to be scrapped or rephrased - but the clueless Aussie repeats almost exactly what she had said before.

The Drive actress is currently in Australia promoting the new series of Mad Men, so was understandably keen to shift the conversation away from the well-worn topic of her body.

According to E! News, Waterhouse ends up skipping the question after Christina’s outburst and off camera the American actress reportedly told her publicist: "I think calling me full-figured is just rude."