Russell Brand was interviewed by Jeremy Paxman for Newsnight and it was glorious. Everyone’s favourite big-haired comedian who loves-the-ladies spoke out about his utter nihilism with the current political system within the UK. He spoke passionately about encouraging change to what appears to be a half-frustrated, half-impressed Jeremy, incorporating his trademark humour into his highly literate argument.

Russell Brand appeared on BBC Newsnight in an interview with Jeremy Paxman after he was recently a guest editor for the left wing magazine New Statesman.

What begins as a discussion about why Russell decided to editor the magazine (answer: “I suppose like a person who’s been politely asked by an attractive woman”), the conversation soon turned as Russell talked about his idea for a “political revolution” to an incredulous Jeremy Paxman and the discussion became rather heated.

After Jeremy questioned him closely about the validity of his idea of a revolution and exactly how it would work, Russell takes a light hearted reaction, saying: “I’ve not invented it yet Jeremy! I had to edit a magazine last week; I’ve had a lot on my plate!”

The conversation soon turned though when Jeremy labelled Russell as “trivial” and “facetious” - this is when things suddenly became serious.

“I think we should have a socialist egalitarian system based on the massive redistribution of wealth, heavy taxation of corporations and massive responsibility for energy companies and any company exploiting the environment,” says the Get Him to the Greek actor when asked about his idea for the future Government.

Despite the comedian not taking himself too seriously, his fervent argument with Jeremy have impressed many, with Twitter users flocking to the social media site to support Russell’s claims.

These included one social media user who tweeted: “He's got my vote. Bravo Russell Brand.”

One person wrote: “Russell Brand will not be silenced, mocked, or belittled. Amazing interview.”

Another commented: “This realisation that Russell Brand is in fact the Messiah is disorienting on so many levels.” 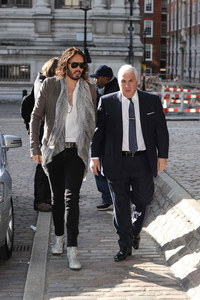