It may not be Thursday, but this Taylor Swift throwback is too cute to miss! The singer posted a short clip from a Christmas home video, where 4-year-old Taylor is indecipherably and adorably chatting on the phone.

One more reason to love Taylor Swift: she was one cute kid!

Last night, the singer posted a Christmas home video from twenty years ago on her Instagram page, with the caption, “Christmas 1993, on a very important phone call with Britany.”

While you can’t really understand much of what the little cutie, then 4, is saying, she is too cute with her mussed up blond head of hair and red pajama dress.

Taylor recently celebrated her 24th birthday with her closest friends in Melbourne, Australia. The Red singer posted pictures from the garden party to her Instagram page.

The singer’s famous bestie, Selena Gomez, was conspicuously absent and replaced by rival New Zealand singer, Lorde. Despite S, Taylor wrote that it was, “The best birthday I’ve ever had.”

Taylor's had a number of achievements this year, from her best-selling album Red to her performance at the Victoria’s Secret Fashion Show. The singer tries to take the success in stride, rather than thinking too far in the future. 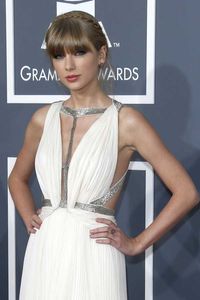 In an interview with Entertainment Weekly, Taylor said, “One thing I’ve tried to never do is make wish lists. I try to have a very steppingstone mentality about this whole thing, where as soon as you make one step you visualize the next step, not five steps ahead.”

Well, wish list or not, we’re sure Taylor will have no problem dominating the music world in the future.

Whether she’s a little starlet-to-be or the reigning princess of pop, Taylor steals our heart every time she’s in front of the camera.

What do you think of Swifty’s adorable Christmas throwback video? Tweet us @sofeminineUK.