Home / Entertainment / News celebrities / Where Are The Babes Of Star Wars Now? 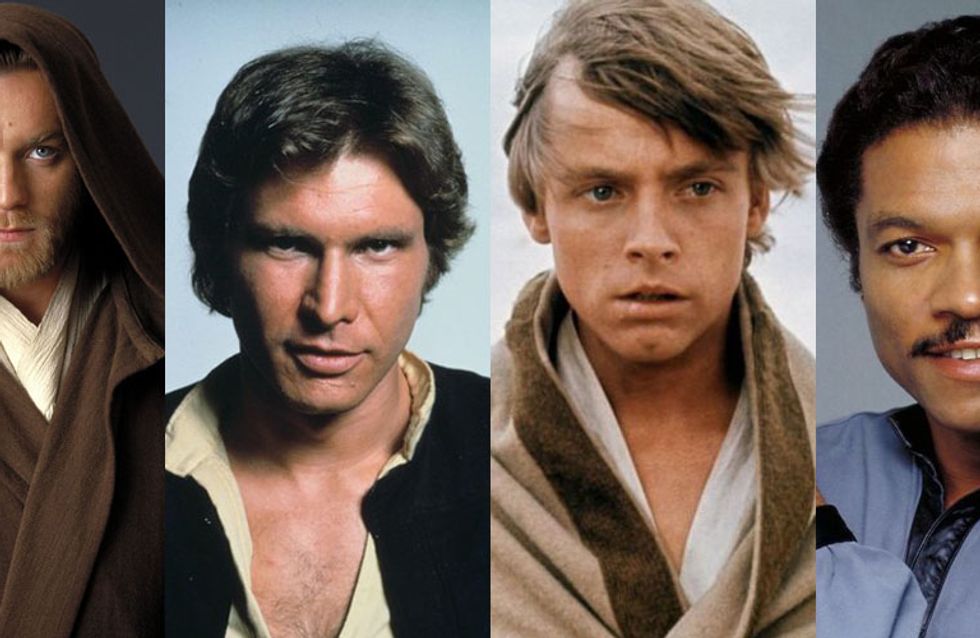 Star Wars Episode VII: The Force Awakens is so, so close now you guys. In less than two weeks most of us will finally be reunited with Han Solo, Princess Leia, Chewie and the rest of them but we have to ask: what about the other actors from the Saga? Especially the ones that could rival Han as total intergalactic heartthrobs? We did some digging and found out what happened to the actors who once starred in a galaxy far, far away...

Mark Hamill largely turned to voice work following Return of the Jedi, and is particularly well known for voicing The Joker in many a batman movie. He has most recently starred in Kingsman: The Secret Service and The Flash, and of course will be reprising his role as Luke Skywalker in Episode VII. He has been married to dental hygienist Marilou York since 1978 and has three children, adorable!

Harrison Ford is an action film star particularly well known for playing the iconic Indiana Jones and being hilariously deadpan in interviews. He will be reprising the role of Han Solo in The Force Awakens, though it sounds like that's one of the only things that have been good about his year after getting into a plane crash and fracturing his leg on the Star Wars set.

Billy Dee has had a colourful career since playing the sauve and cape-swishing Lando. From appearing as a series regular in American soap opera General Hospital: Night Shift to making cameos in just about everything (Modern Family, Scrubs, NCIS etc). He also appeared in Dancing With The Stars in 2014 but had to drop out due to a back injury.

Luke's buddy Wes might not have had much screen time, but he was still a much loved career who still gets attention to this day (they even use him as an alias on Supernatural!). That being said, Denis doesn't seem to want anything more to do with the character and apparently turned down the offer to appear in Episode VII, saying it would have "bored him". To be fair, he now appears in BBC's New Tricks as a Detective Inspector, which sounds like much more fun than fighting in an X-wing. OH WAIT NO IT DOESN'T YOU MAD BRO?!

The once delightfully moustached starfighter squadron is now a TV actor and has done a couple of stints in Doctor Who, including appearing in 'A Town Called Mercy' alongside Matt Smith.

If the Empire was your thing back in the day, chances are you remember the straight-laced and totally chiselled General Veer. Nowadays you can see Julian playing old in Game of Thrones as the tricksy Grand Maester Pycelle.

You know, that one who was Luke's snowspeeder gunner in Empire Strikes Back who says: "right now I feel like I could take on the Empire myself" before dying about thirty seconds later? Well, apart from occasionally treating us to a signing, the actor changed his career to public relations and apparently plays guitar like a champ.

Since appearing as a rebel leader in Empire Strikes Back, John's most notable news is that he is that guy who always had a part in every Pixar movie, including Hamm in Toy Story, The Abominable Snowman in Monsters Inc and so on. He basically has a voice that reminds us of childhood, amazing!

Jedi Knight Qui-Gon Jinn is just one of the many, many legendary roles for Liam Neeson. Since The Phantom Menace, Liam has voiced Aslan in The Lion, the Witch and the Wardrobe, played Zeus in Percy Jackson, Ra's al Ghul in the Dark Knight trilogy and Hannibal in A Team.

Since chopping Anakin apart in Revenge of the Sith, Ewan's filmography is like one of those cartoon scrolls that roll across the floor: he has been in EVERYTHING. He is also married with four daughters, and filmed two documentary motorcycle series with his best friend called The Long Way Round and The Long Way Down. He is next to appear as Lumiere in the live-action Beauty and the Beast.

Hugh has appeared as Ric Griffin in Holby City for 14 YEARS now! He also appeared in an episode of Who Do You Think You Are? and discovered one of his ancestors was Dutch official, Pieter Martinus Johannes Kamerling.

Samuel has had a crazy career since playing the purple lightsaber wielding Jedi, most recently appeared as SHIELD director Nick Fury in the Avengers movies and Agents of SHIELD. In 2011 he was the high grossing actor of all time, with his movies making an combined $7.4 billion (and we think Snakes on a Plane really had something to do with that).

If facial tattoos and horns are the sort of thing you're into, you're probably wondering what Darth Maul is doing now. As well as appearing in X-Men as Toad in G.I. Joe as Snake-Eyes, Ray is probably best known for playing Edger in the fourth series of the popular sci-fi show, Heroes.

Hayden is in a long-term relationship with actress Rachel Bilson, and the couple had a baby girl, Briar Rose, last year. His acting roles might have gotten a little...erm...odd (his most recent movies include an indie and a Nicholas Cage film) but his interests have gone in an unusual direction - farming. Hayden bought a farm in 2007 and apparently it inspired him to release a men's clothing line in 2013. Yeah...we don't really get it either.

Temuera released his first album in 2014 called 'Tem', and also appeared in the Green Lantern movie in 2011 as Abin Sur. Ah Temuera. Of all the superhero movies you could have been in...

Since appearing as the younger version of Luke's Uncle Owen who wouldn't let him go to the Toshi station to pick up some power converters that time, Joel has appeared in Zero Dark Thirty and The Great Gatsby. He also wrote, directed and appeared in psychological thriller, The Gift.

Jimmy has done pretty well in terms of the golden age of television, appearing in not one but two critically acclaimed shows as Miguel Prado in Dexter, and Nero Padilla in Sons of Anarchy.

Jay now has his own children's TV show called 'Jay's Jungle,' where he plays an explorer on a lighthouse and the kids need to work on teamwork and creativity. Amazing.

What, you didn't think he was hot in the movies?! What?! Michael Carter most recently appeared in BBC's Hunted as a genius mathematician but it doesn't look like he's done much since taking off his weird pink, snake-like wig thing in Star Wars.

Looking at The Force Awakens trailer, Chewie is still hanging out with Han Solo and keeping his fur clean and well-brushed.