Is This The Most Misogynist Brand In The World Right Now?

Their summer campaign shots have to be the most distasteful, objectifying and misogynist ads we've seen since the 50s. Their campaign essentially took Robert Thicke's (clue is in the name) idea for his Blurred Lines video and have turned their site into the shopping equivalent.

When you visit their site first you see a man at a beach/pool party (wearing a suit - who does that?!) surrounded by hoards of women in matching bikinis. Then you have the ultimate choice as a consumer. Click the button to see the uncensored version.

Not only is this patronising and embarrassing for men who might just want to, say, buy a suit, without being attacked by bare breasted masses, it's also deeply objectifying and sexist in its treatment of women, who are basically there, let's face it, to sell the clothes. Because without putting a few nipples nearby, Suit Supply might actually have to think of an original way of marketing.

Despite recycling the 'put some hot naked chicks' philosophy of advertising, their site claims that their "pioneering spirit generates a contagious energy, which is what enables us to keep putting new ideas into practice."

Their previous campaigns have been just as shocking with a rapey, pervy, sexually aggressive flavour to all of them. We're not sure why Suit Supply think it's cool to be associated with these values. Any ideas?

​We're ready for THESE kind of adverts to stop and disappear from planet earth. 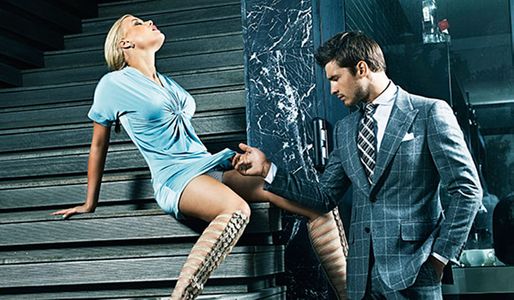 Pissed off? Angry? Rolling your eyeballs or already writing a complaint? Tweet us @sofeminineUK