The A-Z of aphrodisiac foods

by Charlotte Hoddge Published on 8 May 2018 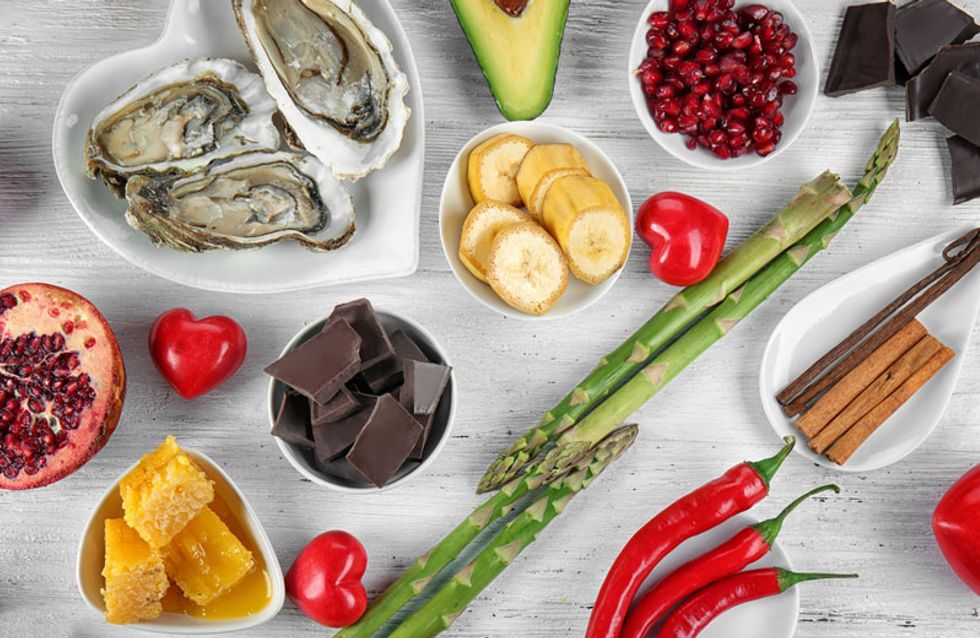 Even the NHS says aphrodisiac foods can help bring couples closer both physically and emotionally. It's got to be a good thing!

So if you're intrigued here's our A-Z (well, W actually) of aphrodisiac foods... how you eat them is up to you!

A for almonds and aniseed

Almond The almond has been a symbol of fertility and an aphrodisiac through various ages and some believe that just the smell can stimulate women sexually. Roll out that marzipan girls!

Aniseed A sexually powerful product according to the ancient Greeks and Romans, who recommended sucking the seeds to increase libido.

Thankfully times have moved on since then so try a shot of absinthe or ouzo instead... warning! Too many will spoil any chance you had of getting luck this Valentines or any other day!

You could always just go for some liquorice or chocolate flavoured with aniseed - the trick here is a little will go a long way.

A is for avacado and asparagus

AvocadoThe Aztecs allegedly called the avocado "ahuacatl" - their word for'testicle'... but if that doesn't turn you on (it doesn't do much for us either) avacados are at least a vertible treasure trove of vitamins and good stuff.

They contain vitamin B6, which is said to increase production of male hormones, as well as potassium, which helps to regulate the female thyroid gland - not sexy but at least you'll look and feel pretty good.

Asparagus The humble asparagus spear is a powerful aphrodisiac - not only does it look a bit phallic but it also contains vitamin E, which makes you gorgeous (think healthy skin, hair and nails) and is also said to be a sex hormone booster. Delicious.

Bananas Phallic again - sometimes that's enough to get a foodstuff on the aphrodisiac list. In the case of the banana it's also making an appearence due its levels of potassium and B vitamins which aid your sex hormone production.

They're also a great source of instant and long-lasting energy - so have one before sex to give you the staying power to satisfy your significant other.

Bananas are excellent at regulating blood pressure, too. High blood pressure can lead to erectile disfunction and that's no fun on Valentine's Day (or any other day for that matter).

So whack out those bananas and away you go!

C is for caviar and celery

Caviar Testosterone is great for your sex life - it makes both men and women more randy and sexually stimulated. Zinc, found in caviar, stimulates the formation of testosterone so it stands to reason that posh fish eggs are in fact an aphrodisiac!

Celery Not a universally loved veg but apparently it gets women going. Celery contains androsterone, a hormone that researchers believe attracts females when it's secreted through sweat. Nice.

C is for champagne and chilli

Champagne Tipsy = amorous. Champagne is the drink of love often the mere presence of that expensive bottle will get you going. Drinking too much, however, will not help your chances.

Chilli peppers Hot chillis are thought to release endorphins which give our bodies a high. Many hot foods fall into this category but chilli's also contain the chemical capsaicin, which stimulates our nerve endings and raises our pulses.

A little tip we have is to put a tiny bit of chilli in your cocktails. Honestly, it works wonders!

C for chocolate and coffee

Chocolate Nothing says "I love you" like a box of chocolates (apart from maybe a diamond ring).

It contains a stimulant called phenylethylamine, and a substance called theobromine which is thought to act on the neurotransmitters of the brain to give you a natural high with a sense of well-being and excitement.

Use dark chocolate with a high cocoacontent as this is what makes the magic happen.

Coffee You stand on your doorstep at the end of the perfect date, and think of saying 'want to come in and tear my knickers off with your teeth?' but that's perhaps a little forward.

Instead you murmer: 'how about a coffee?'... the meaning behind the message is the same.

Coffee's actually on the list for its stimulating qualities but it's earned its reputation as a sexy beverage by the power of suggestion alone.

C is for cream and cucumber

Cream Again, not an aphrodisiac by any merit of vitamin or mineral content, cream is here some people swear by it in food play. It can be a bit messy but isn't that what sex is all about?

Cucumber According to Alan Hirsch of The Smell & Taste Treatment Research Foundation, women taking part in a 2006 study on arousing scents were most turned on by the smell of cucumber.

Figs This one's for your partner - ask them to open a ripe fig and eat it seductively in front of you. This is supposed to be a powerful aphrodisiac because the fruit's insides look like female genitalia.

Hmmm... well at least they taste good too.

G for ginger and ginseng

Ginseng Often found in Asian cuisnes such as Chinese and Korean, ginseng is believed by many to increase sexual desire.

Oysters are probably the world's most well-known aphrodisiac and they've been top of the sexy food list since the age of the ancient Greeks.

They're full of zinc which helps in production of testosterone, which not only acts on male libido but is also great for the female libido too. Raw oysters are best served with a glass of cold Champagne.

Pine Nuts Like oysters and caviar, pine nuts are full of zinc which is great for producing sperm and for increasing the libido.

Puffer Fish This is a massive aphrodisiac in Japan but beware, this fish is highly poisonous. Eating it can kill if it's not prepared correctly. Presumably those turned on by a flirt with death would be into this but we don't recommend you try it at home.

Pumpkin Seeds More zinc! You can eat these toasted or raw and they're great on a sexy salad (if such a thing should ever exist).

R for radish, raspberries and rocket

Radish Egyptian pharoahs were all about radish when they wanted to up the anti in the royal chamber. It's thought that their spicy taste could stimulates the palate but as for anything else...we're not so sure.

Raspberries Succulent red fruits that are perfect for feeding to your lover and are especially good when dipped into melted chocolate - an aphrodisiactwo-for-one!

They're red (the colour of l'amour) and they're high in vitamin C, which may not turn you on but will sure keep your healthy.

Rocket Even back in the first century A.D. they were using rocket (or arugula) leaves to boost flagging sex drives. But were as they used it with grated orchid bulbs and parsnips, we recommend toasted pine nuts and pistachios for a more palatable sexy salad!

S for sweet basil and strawberries

Sweet basil Maybe it's the smell, but some people think that basil has the power to stimulate your sex drive and boost your fertility - so don't be too annoyed if he turns up with a takeaway pizzathis Valentine's Day.

Strawberries For all the same reasons raspberriesare on the list! Pop one in your champagne glass, dip them in some lush melted chocolate... strawberriesare sensual, sexy and a total cliché but we love them!

Unfortunately they aren't in season for Valentines Day but for some summertime sexiness you can't go far wrong.

Truffles are one of the most extravagant foods out there and this point alone is sometimes enough to turn a women on.

They may not look so appealing but trust us, these babies pack a punch. Drizzle a little truffle oil on some pasta, or put a few shavings on some risotto.

Their delicious taste and musky aroma certainly stimulates the palate which can lead to arousal elsewhere.

Your Valentine's Day or romantic datewill be memorable for all the wrong reasons if you have one to many rosés!

However, a glass or two of a full bodied red can get things going for all the right reasons...

by Charlotte Hoddge
#Keeping love alive
For all the best videos, memes and shareable news!