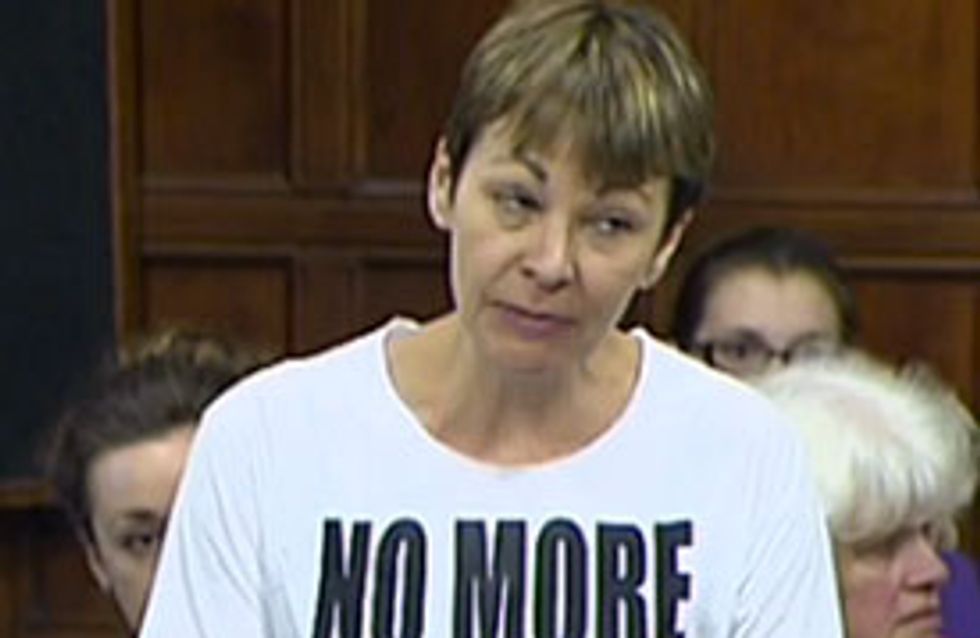 Green Party MP Caroline Lucas was today ordered to cover up during a debate on media sexism and the No More Page Three Campaign. The MP was called upon by the Chairman to adhere to the dress codes set out for Westminster, as she debated the wide spread availability of The Sun newspaper within the estate grounds. Oh the irony.

At sofeminine we're well behind the No More Page Three campaign and have been from day one. We're fed up of seeing boobs instead of news. In a nutshell it's a archaic tradition that's outdated, insulting and degrading - for both men and women. Men are no longer the apish blokes of the 70s demanding a daily dose of breasts, and women are no longer willing to put up with such institutionalised sexism. Enter women's rights hero and Green Party leader, Caroline Lucas.

She wrote to the House of Commons authorities to request that The Sun newspaper be banned from the palace of Westminster until it stops publishing the 'Page Three' section of topless models.

In her letter she states: ​"I do not think that a newspaper that persists in carrying images which are degrading to women should be widely available across the parliamentary estate. I am sure you will be aware that there is a strong link between the portrayal of women as sexual objects with attitudes that underpin violence and discrimination against women and girls."

Yet during a debate on this issue (today) the Brighton Pavillion MP was made to cover-up her 'No More Page Three' T-shirt while leading a Commons debate on media sexism.

The Chairman asked her to "adhere to the appropriate means of dress" and put on her jacket (her arms were exposed past the elbow in her slogan tee).

Responding to his comments she said: ​"It does strike me as irony this T-shirt is regarded as an inappropriate thing to wear in this House, yet it is deemed appropriate for this type of newspaper to be available to buy in eight different outlets on the palace of Westminster estate."

We hear you Caroline. We do find it kind of irritating that topless models, tits and arse, soft-porn imagery if you will, is deemed a-okay for consumption in the Westminster estate. And we find it a matter of discrimination to quash debate on the matter by bringing in the minutaie of dress code. Sexism in the workplace much?

Just moments before being run down Caroline had said: "There are few things more important than making sure that every member of our community feels safe in our own home, in their own workplace, community and school. Sadly for far too many women and girls in the UK this is simply not the case."

Maybe the Chairman found the concept of not having access to The Sun's buxom babes just too scary a thought and spoke without thinking. Or maybe he really does just like to live life by the rule book. Either way the timing couldn't have been more ironic - and we're hoping the request to cover up doesn't cover up the real debate - the fact that Page Three objectifies and sexualises women in a manner that's degrading - and it has to stop.

In the words of the No More Page Three campaign:​

"The largest female image in our most widely-read newspaper is of a semi-naked young woman. She is there purely for the sexual gratification of men.

"​This is unacceptable.We want to live in a society where the most widely-read newspaper is one that respects women. Instead, The Sun publishes Page 3, which reduces women to objects. It reduces men to objectifiers. And it reduces this country to one that upholds 1970s sexist values. We’re better than this"

If you wish to support the campaign (and we urge you to take part!) then get involved, sign the No More Page Three campaign and show The Sun (and Westminster) you're so over this kind of sexism.

Annoyed by this cover up request? Fed up of Page Three? Tweet us @sofeminineuk and let us know what your thoughts!