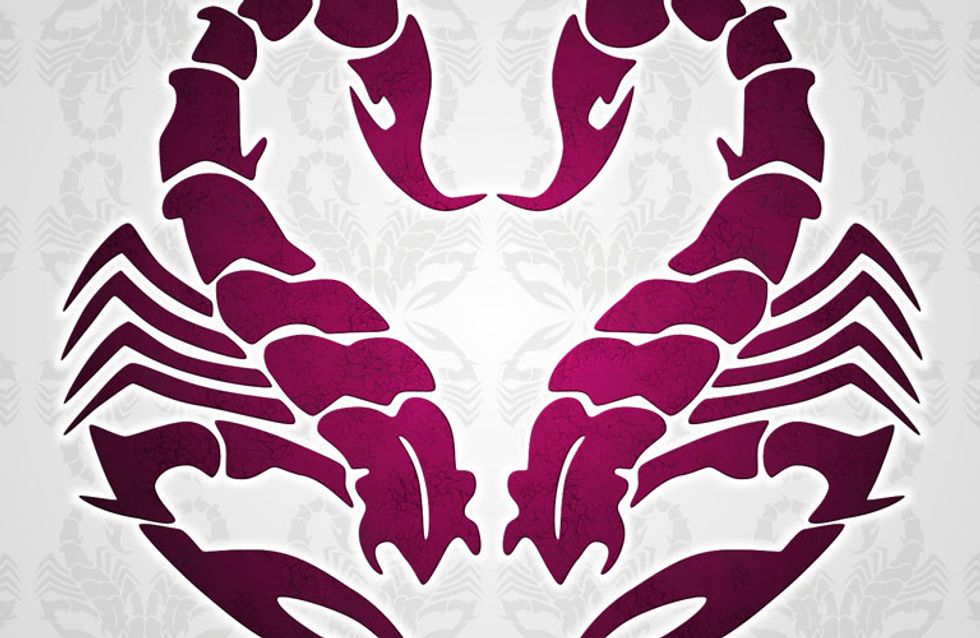 With Scorpio we enter November, a cold, rainy month that sees us celebrate saints and all the dead. In Scorpio, dark values win over the light of day and the subconscious reigns. Everyone destroys themselves to be re-born as something better. Be aware of Scorpios you believe are dead: they could be in the process of living again, because they see and know, and always have their eyes open! They're not attached to values outside of existence and seek the essential in everything.

Key phrase: we have

Symbolic image of the sign
The scorpion is one of the oldest animals on the planet. Like Cancer, it is covered in a shell that it sheds, only to grow another identical one very quickly. It has endurance, can live through long periods of fasting and is not affected by climate. It possesses a poisonous sting at the end of its tail which it uses to kill its enemy. Surrounded by a circle of flames, the Scorpion can also kill itself. Scorpio is resistant and vindictive despite its calm appearance, hiding a lot of aggressiveness. Scorpios seek neither to please nor to seduce: they desperately seek the truth, don't fear death and understand from a very young age that it’s part of life; they accept, and even seek it out and master it.
In Greek myhtology, Scorpio is considered the avenger of Aremis/Diane, the wild virgin, that Orion attempted to abuse and who was saved by a scorpion who stung Orion on the heel. For saving the goddess, the scorpion was transformed into a star.

He's either very handsome or ugly, annoying, exasperating and is always flirting. We either love him or hate him! His eyes are magnetic and piercing, with a gleam of mocking cheerfulness or seriousness depending on the moment. In general, he is svelte, slim and muscular, with intense strength. He moves fast and hates slowness.

He’s suited to investigation and digging deep, so he'd make an excellent psychiatrist, psychoanalyst or psychologist, delving into the torment of the human soul. This is why he may be a detective, investigator etc. Through the influence of Mars, his second planet, he is linked to medicine and surgery. He is attracted to all that concerns suffering and the way people act. Research and biology also interest him. Rebellion and revolutionary tendencies, and especially his taste for power, could push him into politics or a trade union. He's also attracted to the occult and esotericism: you may also find him in astrology, clairvoyancy, magnetism or the paranormal.

He doesn't love half-heartedly, and when he's in love he has no rest or peace! There's an ongoing battle between the two sides of him in affairs of the heart. All male Scorpios seek real feminine women who will bring them self revelation; an initiator to guide them from the abyss of their suffering and make them happy. Scorpio projects who he is, and few women can put up with his confrontational nature and tears after every crisis - rarely tears of happiness! To seduce him, you need to go further than him, show him that you are not afraid of him and show him that he has to try if he wants to be with you. He struggles with his day-to-day love life.

Miss Scorpio is a she-wolf, a mysterious and attractive woman. She has breathtaking beauty, or else she's one of those unattractive women who eclipse all the pretty girls with their personality. She is sexy, sensual and bewitching. She’s a tenacious woman and her grudges are as strong as her attachments. You can't help but notice her!

Like Mr Scorpio, she's good at investigation, research and discovery, but she may be more tempted than Mr Scorpio by paranormal psychology and more 'irrational' sciences. She may manage a business, be at the boss' right-hand side, make money and work independently rather than in a team (others are too inert, slow and mediocre for her).

She loves with a passion, rigour, ardour and exaltation that scares most men, most of whom aren't used to this kind of intense emotion. In her youth, men think she's gorgeous, and they'll remember her later on in life when they've settled down with someone a bit calmer! She leaves unforgettable memories but will have few marriages or successful long-term relationships. But if she meets someone that is worthy of her admiration, she’ll be completely besotted, devoted and make an excellent partner.

106 shares
From hair ideas to outifts, look no further for your daily inspiration