Would You Work In The Sex Industry? We Talk To Playkinky's Founder Jo Hudson

Only about a year ago, Strategic Planner, Jo Hudson decided to give up the job she’d worked in for the last decade and launch her own business. Sounds like a pretty standard story so far doesn’t it?

We’re going to jump right in here, what made you want to start selling sex toys?

I’d always thought I would try to run my own business but it was after I was on maternity leave with my second child that things started to come together. I was chatting to my girls about post-baby libido, kegel exercises, Fifty Shades etc. and I got the idea for Playkinky.

The treatment of sex toys is very giggly, girly and silly and then on the other side there is just wholesale. You go online to buy an intimate product and you just feel like you’re in Argos. So I thought there must be a better way.

After that I spoke to a friend who was an accountant and we talked about whether it would be a viable business and things just spiraled from there.​

So tell us what Playkinky is all about?

What we’re trying to create is something that feels a bit nicer to shop in. From our observation, a lot of people have been to something like an Ann Summers party at some point in their lives. They’ve bought something but they don’t feel totally comfortable buying anything more as the environments you buy from online are more 'wholesale-y' or they feel very 'warehouse-y'.

What we do is cater to suit all tastes; its not about price, it’s just about quality. Everything we stock we see samples first, we test them, we work out whether it’s a decent product before we stock it, which is a rule that I think all companies should follow. I think most of the time it’s all about getting it and flogging it, which is not what we’re about.

What do you want to achieve with your business?

One of the things that we said when we started was that we wanted to be really, really fussy about the quality. I think that if you dig into it there’s a lot of strange stuff going on in this industry because it’s not that well regulated.

Have you found out anything about attitudes to sex that has really stuck with you?

I found out early on when we did some research, that 50 per cent of couples we spoke to weren’t completely honest to their partner about what they enjoyed sexually. It really shocked me, and the figure was higher in married couples.

There is that Britishness, which is still hanging around. Although there’s Ann Summers on the high street and we talk about sex much more, there’s still that feeling that people don’t feel confident enough to say what it is that they enjoy. That really motivated me to do this, there’s definitely a role for exploring more about sex and what people enjoy together.

Because of that, we didn’t want to just be flogging sex toys. We thought we’d give them a total offering including a magazine to distribute hand to hand. What we’re hoping for is that through this, manufacturers will start to support us.

Describe the typical start to your day?

My daughter is four, just, and my son is 21 months so my day actually starts at six-ish or when my son decides to get up.

We’ll get up, watch the Lion King – seriously, the section of the presentation of Simba, I must have seen about 200 times – so when he’s had enough I’ll take them off to nursery, shut the door and get to work.

I write the product descriptions – not trying them all out myself by the way – but we read all the reviews. I deal with the photographers as we shoot all of our own pictures. I do all of our social media, dealing with our office in Berlin, the list goes on. As we’re a start up I do a bit of pretty much everything, really.

How do you manage to balance looking after your children and running your own start up?

It works brilliantly well for me actually. I’d worked in Ad Agencies all my life and I loved it, but once I had kids it became difficult. This is much more on my terms, on my time, so if I need to work from home, or if the kids are sick then I can do that.

Does selling and promoting sex toys ever clash morally in any way with your family life?

The kids thing is fine. When I was in advertising, I actually found some of those conversations harder than I do with this. I remember being in meetings talking about selling chocolate to kids; it just didn’t feel right.

So morally, I have no issues with this because I think this is about enhancing sex lives with something good. Being satisfied sexually is really important for your wellbeing. We sell nice products and I have complete faith in everything that we have in stock.

Have there ever been any embarrassing situations?

I think I just said it was a toy, thankfully they’re easily distracted at that age. At the moment they’re still small enough that if I had sex toys on the kitchen table, they wouldn’t bat an eyelid but at some point I’ll have to think about that but at the moment it’s not an issue.

Is there anything that you’re not comfortable with that you have to deal with?

There's been so many discussion about the pornography industry over the last year especially. What's your opinion on it?

As a mum and sex toy retailer, you must be pretty aware about pornography and the darker side of the internet. Do you ever get concerned about that for your kids? 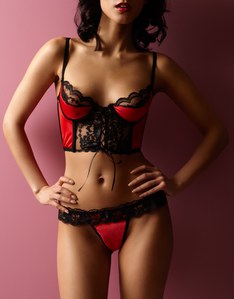 What advice would you give to women wanting to start their own business?

First thing is: it’s really hard to start out with something from scratch. This first year I've been working all night. It's pretty full on at the beginning.

I'd say don’t be shy about wanting to share what you're doing with people. It was through having conversations and starting to know people were interested when we started getting investment. I think trying to do it on your own is incredibly hard.

What’s the highlight of your career with Playkinky so far?

When the site went up. We’d been working on it for a year already. So to go live was a brilliant feeling, so we could just get on with it.

What’s the weirdest thing that has happened since you started doing Playkinky?

I had a really long email about a man who was interested in tantric sex.

Most people think it’s an extension of your hobby.

Could you do what Jo does? Tweet us what you think at @sofeminineuk.