by Pascale Day Published on 5 February 2016 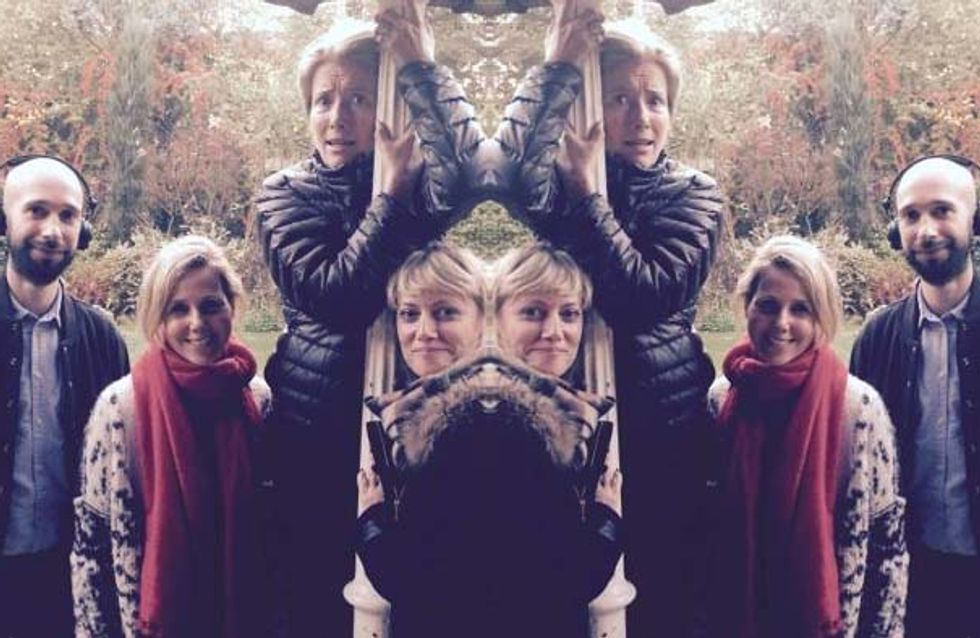 Female comedy continues to going from strength to strength but, as Lily Bevan laments, she is tired of playing "The Girlfriend"; atypical, one-dimensional characters created for female actors. So, after an impromptu meeting with Sally Phillips, the two decided to take female characters into their own hands. The result? Talking To Strangers.

Lily Bevan and Sally Phillips' new Radio 4 series Talking To Strangers came to life after an impromptu meeting in an office kitchen. Sounds random? You haven't heard anything yet. It was developed as a stand up show at Leicester Square Theatre, which starred both Lily and Sally, along with a bevy of other brilliant comedians. They were soon spotted by the BBC and offered a spot on the home of radio comedy.

Their new comedy vehicle is a smorgasbord of fine British comedians: Jessica Hynes (Spaced), Olivia Colman (Peep Show) and Emma Thompson (Love Actually) to name but a few. You may also recognise Sally from Green Wing, Hippies and, perhaps mostly famously, Smack The Pony, whilst Lily hails from a classical acting background, but was also at Edinburgh last year with her weird and wonderful comedy show, Pheasant Plucker.

The series is all about representing women: crazy, silly, eccentric women who previously hadn't been given much of a platform. It had been a conscious choice of Lily and Sally to step away from the tropes that often come with being a female in comedy, like playing the girlfriend, or the voice of reason. So from the girl telling her boyfriend that she made up her twin to peak his interest ("The other one’s me full of Malibu in a wig!”) to a lady terrified of a swan ("He's trying to drown a Twix wrapper and he's squaring up!"), this series is an endearing portrayal of women, celebrating them at their craziest.

We spoke to Lily and Sally ahead of the release of Talking To Strangers to chat about the show, women in comedy, and the method to their madness.

SoFeminine: The cast on this show is amazing. What did it mean to you to have a cast with such fantastic British women involved?

​Sally: It’s a giant thrill having your material performed by such brilliant people. You could give them a copy of the phone directory, basically and it’ll be worth listening to. It was wonderful.

Lily: Really exciting. It’s my first show, so it was really exciting to work with people like that, and quite challenging to write material that I knew they would be doing - those actresses are my heroes, really. I've worked with Emma Thompson before but I’ve never met or worked with the others before. The first time I met them was when they were being asked to say really daft things. It was quite surreal. I felt really lucky.

SF: What inspired you to write this series? How did you come up with the premise ‘talking to strangers'?

S: ​Lily inspired me. I love her writing so much. She’s got such a way with nouns and an unusual way of looking at the world. Really she’s an extraordinarily talented woman and I just happened to meet her in the kitchen of a friend’s office. Serendipitous.

L: We were looking for a way to link our characters, and we felt like sometimes you end up saying the most surprising things to someone you don’t know. There's a different dynamic. I’ve done a lot of auditions for playing ‘Ben's Girlfriend’ - but then you only get to have a conversation with Ben. I wanted to have conversations where I’m buying a watering can or getting my pubes waxed - much weirder, more random funny stuff than chatting to the boyfriend.

SF: How much of your own lives have influenced this series?

S: They are characters who have grown out of experiences I’ve had or people I’ve met. The woman who has spent her life counting lions and is now regretting it, is kind of a version of me, thinking about my friend Lucy Cooke, the National Geographic explorer who has spent her life travelling the world meeting animals and then me wondering whether comedy was in fact the best way of spending my life after all.​

L: A lot of my life influenced this. The palm reader [in which a hen party is told by a palm reader that they're all going to die young] actually happened to my friend. In one I play a character who’s trying to be really nice, but she loses it each time a new bit of her vag is getting waxed. Because you just can’t be that nice in those moments. I did that lying on the floor at the BBC with my own legs over my head, and the sound guy was on his knees in between my legs with the boom. I was ripping Sellotape off a box to get the waxing timing right.

SF: What's your favourite sketch/character from the series?

S: I can’t pick. Really. Listen out for Jessica Hynes performing Lily’s tattooist character in the first episode, Emma Thompson doing the agonising 'thank you for the sex’ phonetical, Lily’s woman terrified of a swan. There’s something for everyone​.

L: It's hard because I think our guest stars are amazing, so often they make it sound even better. Olivia Colman does a piece I wrote where she's a mum with a son who just got his A-Level results. She was truly terrifying, she really nailed that!

SF: How different is it writing for radio than for television? Which do you prefer?

S: It is quite different, you get to use better words on the radio. Radio feels more like prose, I like the challenge of it actually - working out how to create the pictures.​

SF: Sally, you have a lot of big female names from British comedy in this show, and you’re all from the same network of British comedians, from the same kind of era. How important was it for you to have these women that you know so well alongside you?

S: I’m really happy and proud that we have managed to span 3 decades of talented girls (and boys) - Emma is a generation or two above me, Lily and Olivia are younger. But Jess and I are from the same time. It was wonderful the day Jess was on set. We laughed at all the same things and she performed everything perfectly on the first read.

SF: How do you feel about women in comedy at the moment? Particularly for those over the age of 40?

L: There are a lot of women round who I think are brilliant: Bridget Christie, Sarah Pascoe. There are some really brilliant women on the circuit at the moment that go on panel shows, talk about politics, write articles, but can also be really silly and do good stand up. I think increasingly women are really interesting. It's an interesting time. I'd still like to see more though. ​

SF: What advice would you give to women wanting to get into comedy?

S: Do it! (Please!) Read Viv Groskop’s book. There’s no substitute for getting up there and doing it over and over again. And good luck!​​

L: I think it's important for women to be really silly. Being silly is great for men and women. I went to an improv class, and it seems that this is growing in both Edinburgh and London. I think that's a really great way to get into it.

What do you think of the new show? Let us know! @sofeminineUK