Angelina Jolie was known for some pretty bizarre behaviour back in the day and now some of it's been caught on camera. A photo of Angie getting up close and personal with a horse is set to go on sale and it's not going cheap!

A previously unseen snap of Angelina Jolie posing topless is going up for auction and is expected to fetch up to £30,000.

The shot, which sees Ange half-naked enjoying a horse nuzzling her chest, will go on sale at Christie's auction house.

The embarrassing photo comes from a private collection taken by celebrity photographer David LaChapelle back in 2001.

Angelina was a fresh faced 25-year-old at the time and sports her now-removed tattoo tribute to her then husband Billy Bob Thornton.

She has since covered the Chinese dragon symbol and his name with the geographical co-ordinates of the locations where her children first entered her life.

Despite the somewhat revealing nature of the photo, her future hubbie Brad will not be buying it.

The image is appearing alongside a pic of Angelina and Brad posing as a husband and wife with a dinner table full of 2.4 kids in 2005.

The auction will take place next month with the topless shot appearing in a sale named The Wild Side Of Photography.

Angelina is obviously a fan of horses as it was recently revealed she and Brad are planning to have them at their nuptials.

Their florist told Grazia Magazine the couple are planning to have "Shetland ponies leaping as they go up the two-mile long drive to the house."

We’re wondering if there'll be some interesting wedding snaps to follow! 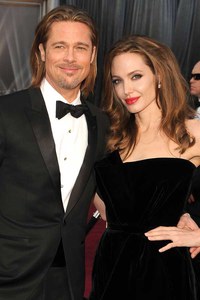