When the story first emerged of the potential hook-up between supermodel of the moment Cara Delevingne and reality TV 'star' Gaz, we were all scratching our heads. But if Gaz is to be believed, these two have hit it off and chat all the time. She's very down to earth but it may not get off the ground since she keeps blowing him off for celebs parties.

Geordie Shore star Gaz - or Gary Beadle - has revealed that he and Cara Delevingne are pretty close and "speak every day".

The pair originally met through Twitter after they shared some flirty posts, competing over their drinking abilities.

They have since swapped numbers and are even planning to meet up in Ibiza for Cara's 21st birthday party.

The 25-year-old claims this is the first time they've managed to arrange to meet as she's frequently cancelling plans to meet up with her A-List pals.

Gaz gushed: “Cara’s having this massive Ibiza birthday party in August, which I’ll be going to, but hopefully I’ll see her before then.”

He told The Mirror all about how close they've become since linking up over Twitter.

He said: “We speak every day. She’s the most down-to-earth, wicked bird ever. We’re total opposites, but we get on really well.

“We always send each other pictures and videos of where we are. During our first conversation she had to correct me on her surname ’cos I couldn’t pronounce it. She thinks my accent’s really funny."

Keeping up the jokes about their drinking skills, he added: “The other night I sent her a picture of a bottle of vodka saying, ‘I’m in preparation for our night out.’ She was clubbing with Rihanna and hit back at me saying ‘If anyone can prepare me for a night out with you it’s Rihanna.’”

He explained that part of the reason for their new-found bond is thanks to her being so chilled - despite her huge success and privileged lifestyle she apparently remains very down to earth.

Sounding smitten, he continued: “We were going to go out tonight, but she’s in Germany doing a modelling job. But next time we’re both in London we’ll def meet up. She is so fit, but she’s cool too.

“She could brag about her amazing lifestyle, ‘cos she’s always off to New York and Paris, but she doesn’t.

“She’s like, ‘I’m in the airport scoffing my face with McDonald’s.’ That’s what I like so much about her."

So what is it about northern lad Gaz that does it for Cara?

He said: “She likes me ’cos I’m a bit of a bad boy. She’s not interested in expensive bars and clubs.

“When we finally do meet I’m going to impress Cara by meeting her in Maccy D's getting her a quarter pounder cheeseburger meal, then take her to the nearest bar to get smashed.” 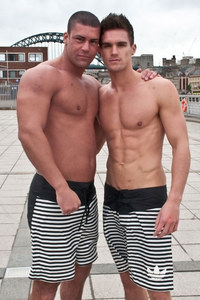