You'd think with a baby on the way Kanye West would be on cloud nine - but it really hasn't been the best couple of weeks for the mega star. First he walks into a sign post, then his super car is hit by his own girlfriend Kim Kardashian's electric front gates.

Kanye West's car was being driven into his girlfriend Kim Kardashian's house when it was hit by the electric front gates that had started closing too early.

Of course, Kanye doesn't have a cheap little hatchback - he has a $750,000 Lamborghini Aventador.

The matte black car, which looks a lot like a batmobile, was seen driving into Kim's driveway in LA when the heavy wooden gates closed in on it.

A source told TMZ: "The driver pulled into the gate but didn't make it all the way in before the gate closed on both sides of the car."

The car's repair shop was quick to send out a mechanic to see how much it would cost to fix the damage.

Kanye is yet to look at the damage himself but if his reaction is anything like it was to his accident last week, we'd suggest giving him a wide berth.

Last Friday the rapper was leaving a Vietnamese restaurant with his pregnant girlfriend Kim, when he accidentally walked into a sign.

The rapper was left groaning and holding his head in his hands. He quickly returned to the restaurant to sort out the cut.

When he came out onto the street to see the paparazzi once again, Kanye was not amused.

He was caught on video shouting: "Don't take another f**king photo man. All you motherf**kers stop it." 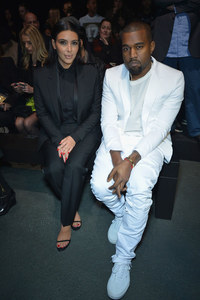