Khloe Kardashian has had her fair share of weight battles with the media and has now decided to defend her pregnant older sister Kim, who's been criticised and mocked for her curvaceous baby body.

Khloe Kardashian has spoken out against the criticism her sister Kim's received since falling pregnant.

Kim, 32, has been the victim of some serious media abuse for her weight gain and fashion choices over the course of her pregnancy.

At the Met Ball earlier this month, Kim arrived in a full length floral dress with matching gloves and there were some unfortunate comparisons made between her and both Mrs Doubtfire and an old fashioned sofa…ouch.

Now seven months pregnant, Kim has really struggled with her increased size and younger sister Khloe has taken to the web to defend her.

The reality TV star praised her sister for her courage in the face of such harsh comments.

She said in a letter Kim posted to her blog: "Kim, you may be one of the strongest people I know.

"I have no idea how you endure such abuse but still smile and shine everyday. I commend you for not putting your head down and going into hiding like so many would."

Referencing her own battles with the media, she said: "I find it disturbing that society loves to critique a woman's shape.

"That is low in and of itself, but I cannot tolerate one more vicious attack on my sister!

"For anyone to ever criticize a woman who is growing another life inside of her is true scum in my eyes."

Khloe went on to beg people to think about the lasting effect this treatment will have if "all she remembers is the pain and emotional abuse she has received".

She spoke directly to her sister: "I need you to know how truly magnificent you are! You may be one of the most beautiful women I have ever laid my eyes on.

"Your beauty runs deeper than just what some may see. I know the beauty of your soul."

Khloe also hinted at how much Kim is struggling behind closed doors: "You are perfect the way you are! This is your life! Your body! Your baby!

"I wish you could see how you have this pregnant glow and you sparkle everyday. Your belly is fantastic...You are growing a miracle inside of you! I love you! And I will do anything in my power to protect you!"

We love Khloe’s loyalty - we’d do the same for our sisters! 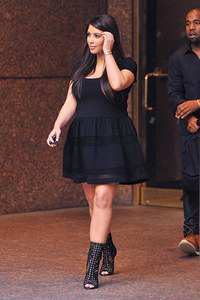 Francesca Menato
…
Pregnant
For all the best videos, memes and shareable news!