You'd think Lindsay Lohan would be pretty familiar with the American legal system these days and yet the starlet has allegedly decided to leave the court-ordered rehab facility she was admitted to on Thursday. She has been given 12 hours to return before there is a warrant out for her arrest!

Lindsay Lohan's whereabouts are currently unknown as the young star allegedly refused to stay at the rehab facility arranged for her court-ordered rehabilitation.

Prosecutors have told TMZ that Lindsay has until sunrise to return before they issue a warrant for her arrest.

There was some discrepancy over the centre she was due to stay in, with a last minute change from the New York-based Seafield Centre to Morningside Recovery in Newport Beach.

Due to start 90-days compulsory rehabilitation, the red-head apparently arrived at the California clinic only to leave a few minutes later.

A source alleged to Radar Online: "She told people there that she didn't need rehab. And then she left. Everyone was stunned."

TMZ also claims that she was spotted at a shop in Fountain Valley at 9am, when her lawyer Mark Heller made assurances she was all checked in.

It has since been claimed that the 26-year-old left because she was scared for her safety and became "spooked" by the paparazzi presence.

According to a source for Us Weekly, Lindsay felt Morningside "was not suitable for her."

Another insider told the magazine about Lindsay's decision to leave: "There were too many paparazzi everywhere and she didn't feel safe. 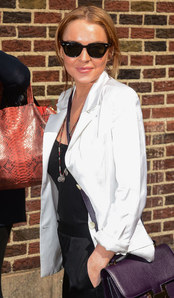 "Nobody close to her is happy about this. They think she's really not being smart."

There are conflicting reports over Lindsay's intentions to return, with a source for Radar claiming that Lindsay has been speaking about going back.

But it's thought she is also keen to return to New York.

Lindsay's father has since confirmed that she never checked into Morningside.

He told Radar: "I have no other choice than to get this out there to help Lindsay.

Michael appears to have dissuaded his daughter from attending her first choice of Seafield Centre.

He revealed to The New York Daily News: "I told her it’s like a motel, and you share a room and have a plastic shower curtain. You can’t smoke, you can’t leave the property. She said, 'What?!'"

The late choice to switch facilities was already causing a problem for the courts, as it technically broke her plea agreement.

But, accommodating as always, the judge agreed to the switch - only to have Linds do a runner!

Back in March, Lindsay pleaded no contest to reckless driving and lying to police after a car accident in June 2012 in Santa Monica.

​Santa Monica City Attorney Terry White has said: "If there’s credible confirmation she’s heading back to New York, then I’m going to have to go in and ask the court to issue a warrant."