The Apprentice 2013: Sophie Lau is fired after the girls lose yet again

Lord Sugar's hunt for a businessman or woman to invest in is well underway - and it was Sophie Lau who was last night fell victim to his pointed finger and was sent home in a black cab.

Sophie Lau last night became the third candidate to be fired by Lord Alan Sugar on The Apprentice.

The teams were challenged to design and sell an innovative flat-pack furniture product - but Sophie was accused of "hiding" behind her teammates.

The 22-year-old restaurateur has admitted her experience in Lord Sugar's boardroom alongside Project Manager Natalie Panayi and Uzma Yakoob left her wanting to be sent home.

"I was like 'I just want to go. Send me back to the house or make me fired, but I've been here for hours and they're still fighting'."

The girls' team Evolve designed the TideySidey - a storage cube with a cushion attachment - which seemed to generate a lot of interest during the pitches, but ultimately secured just 174 sales.

The boys' team Endeavour, project managed by Jordan Poulton, made the Foldo - a table that turns into a chair.

They brought in an impressive total order of 3,216 units and Lord Alan said Alex Mills' Foldo idea was "one of the best he's ever seen" on the show.

While the boys were treated to an experience climbing London's O2, Evolve had to swallow their third consecutive loss.

The business boss told them: "Ladies this is getting very disappointing. It doesn’t matter how good you pitch, your product sucks. It’s like going into war with a peashooter."

After a discussion in the local cafe, Natalie decided to bring Sophie and Uzma into the boardroom because they "hide away from responsibility, they stay safe." 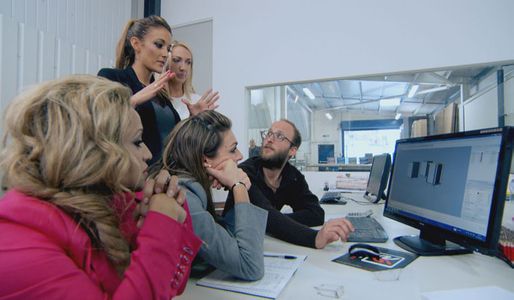 But Sophie was adamant she wasn't responsible for the team losing the task.

She told Lord Sugar: "The failure of this task lies with the design, I don't design I do market research and I think it's a bit unfair I'm here."

But Lord Sugar, 66, concluded: "Natalie, you claim that you’re not a designer. You claim that you wanted to manage the designers. But what you didn’t manage to do is produce a good product.

"Uzma, I’ve had a lot of complaints that you seem to never be responsible for anything, never going to be your fault. In your own words you are a design person. You should have done much better in this.

He added: "I’ve come to the conclusion that out of the three of you here today, and this may be unfair, but my gut feeling tells me that, Sophie, you’re fired."