The Wanted and One Direction have been feuding for a good few months and now Max George wants to make it physical. The singer suggested that the bands take their beef to the boxing ring - all for charity of course.

Max George has suggested that he and his bandmates take on the One Direction boys in a fight.

After feuding with particular individuals from their rival band, Max proposed the lads all thrash it out in a boxing ring.

Louis Tomlinson also got involved in the rows, making fun of Max's bandmate Tom Parker when he admitted he was devastated not to have made it through on The X Factor.

The battles have continued ever since.

Max, 24, told The Sun: "We would like a boxing match - them against us. It would be brilliant for TV, and I have no problem with it at all.

"If they have got an issue, why don't we actually do something financially - like make some money for charity and blow off some steam in the boxing ring?

"I don't think there is a better idea other than that I don't want anyone to get savagely hurt."

Jay McGuiness, who also got into a few heated discussions with some members of One Direction, wasn't so keen on the plan.

He said: "We haven't spoken. I think no matter how much you try to avoid it, people are always gearing up for, you know, what do you think of them, what do they think of you.

"It's going to be really hard to ever have a real friendship, and we don't see them enough for that. We're not going to lose any sleep over it."

The bands' latest dispute was just a few weeks ago, when Louis caught wind of The Wanted bad mouthing him on US radio.

Louis responded by tweeting: “So frustrating when people talk the talk in the press but when it comes down to it not a word is said face to face!”

Sounds like he may be keen for the fight...

The Wanted boys may want to watch out though - the 1D lads are on a strict workout regime for their US tour. 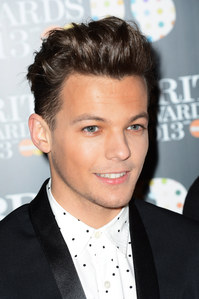 Francesca Menato
…
FeudOne Direction
For all the best videos, memes and shareable news!