TOWIE news: Joey Essex in tears as he proposes to Sam Faiers

Last night's season finale of The Only Way Is Essex was especially emotional as Joey Essex asked Same Faiers to marry him. The pair were holidaying in Dubai when the Essex boy got down on one knee and popped the question. What do you think of Joey's proposal - pretty romantic, right?!

Joey Essex was surprisingly emotional as he proposed to girlfriend Sam Faiers in last night's The Only Way Is Essex.

​The 22-year-old reality star had whisked his long-term love to Dubai as a surprise and had his whole romantic proposal planned out.​

But as they were eating a romantic meal and Sam nipped to the toilet - just minutes before Joey was set to pop the question - he started crying and phoned his dad.

​Joey admitted he was "scared" before Sam returned and he made nervous conversation.

It wasn't long before Joey had welled up again, prompting Sam to ask him why he was crying and wipe away his tears.

He replied: "I just love you so much."

Joey eventually got down on one knee - in his teeny tiny shorts, of course - pulled out the gorgeous diamond ring and asked Sam to marry him.

The blonde Essex girl put her hand to her mouth in shock and replied: "Oh my God, yes Joe."

Sam - who was very composed - commented that the ring was "amazing" as Joey continued to cry.

The pair then rang Sam's sister Billie and later in the episode returned home to an engagement party to celebrate with friends and family.

Once again, Joey welled up as he took to the stage for a speech and thanked his loved ones for their support.

He told his father: "Dad I want to thank you more than anyone I couldn't have done this without you. I hope one day I have kids and are a good a day as you."

Joey's sister Frankie - who helped raise him after their mum died - was also seen with tears in her eyes.

​Elsewhere in the episode, the boys got super-competitive during a football match, with the losing team stripping off at the party as punishment.

​While Mario Falcone and Lucy Mecklenburgh angrily confronted Little Chris after he didn't stand by them during recent cheating allegations.

​Lucy shrieked: "You sat there and did nothing and let all our lives get destroyed!"

​But the series ended on a positive note - with a rather worse for wear Joey singing along to One Direction with his friends and new fiancée. 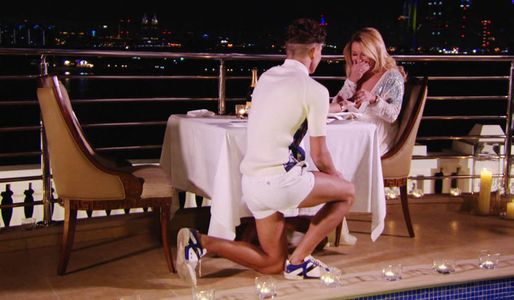 by the editorial team
+
All the news about Sam Faiers