by Pascale Day Published on 2 September 2016 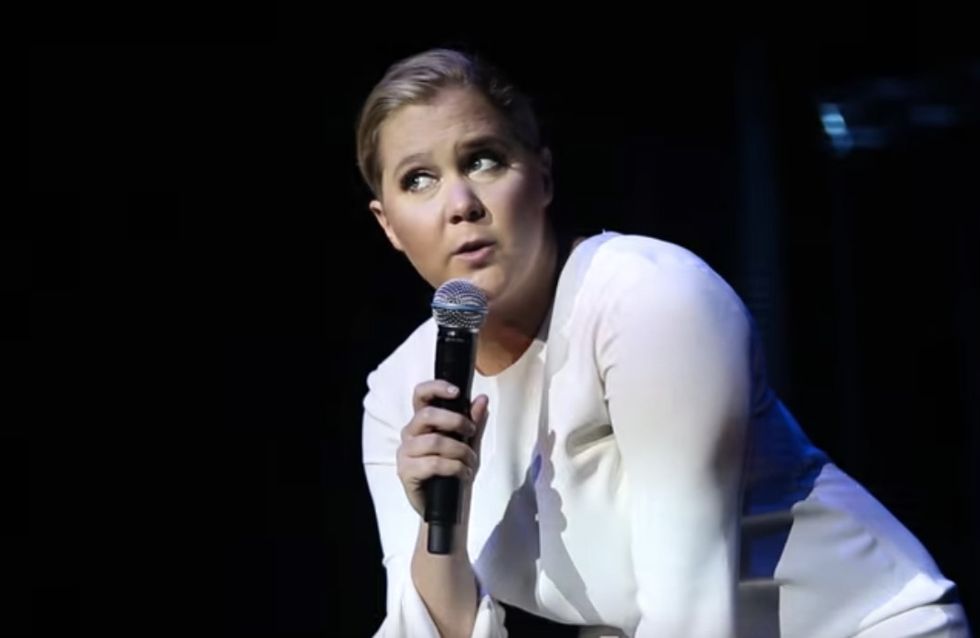 There's nothing Amy Schumer does better than tearing down misogynist pigs. So when a guy disrespects her at her own show in Stockholm, she made a spectacle of him the best way possible. If you need to know one thing about Ms Schumer, it's that you should not, under any circumstances, mess with her.

We're two minutes into Amy Schumer's set on the Stockholm leg of her world tour, and some bro decides to shout "show us your tits!" at the comedian. Not. Cool.

But does Amy Schumer take sh*t from guys like this? Oh hell NO she doesn't. "I want the man who just yelled, ‘Show us your tits’ to come up here,” Schumer says, requesting the people around him help to point out the disrespectful audience member. “It’s too good. Everybody point at him so I know which one. And you’re wearing a shirt that says what?”

"I love pussies," he replies, without a hint of embarrassment. Yup - you read that right. As if we thought shouting "show us your tits" was as bad as it gets, this dude is wearing a shirt that actually says those three awful words. If there was a set uniform for misogynists, this guy has come up with the goods. Amy engages in some chatter with him, revealing his career in sales which Amy mercilessly mocks, before giving him one last chance to behave himself: "If you yell out again, you’re going to be yelling ‘show your tits’ to people in the parking lot, because you’re going to get thrown out, motherfucker… I’ll show my tits when I want to."

But do you really think a guy wearing an "I love pussies" t-shirt is going to take the last word from a woman?! Of COURSE not! And so he yells again, indistinguishably this time, but it's enough for Schumer to get the security guard to escort the bro off the premises as everyone claps him out. Now, if only we could have Amy Schumer with us on a daily basis to provide such clap-backs to all male harassers...

If you support Amy let us know! @sofeminineUK

Your Choice Of Instagram Filter Can Reveal If You're Depressed​​