Playing with barbies can get boring when every single one of them looks the same. But, after 56 years, Barbie has now become a real woman - with hella curves! She now has 7 different skin tines and over 20 different eye colours, so now every girl can see a bit of themselves in Barbie.

Barbie, whose full name is Barbara Millicent Roberts, came in both blonde and brunette when first released in March 1959 and, two years after came her hunky sidekick Ken. And man was she busy: over the course of 57 years Barbie has had 156 different careers. 156 jobs, but she only the one body size in her whole life. A little strange, no?

Soon people began to spot this pattern in Barbie. In all her years she was been the same height and the same weight, with the same tiny waist. What kind of message did it give to young girls if their one prized possession, the woman they wanted to be, was disproportionately and unrealistically thin? Her look was ultimately unachievable, and there was no barbie that looked like a regular girl. 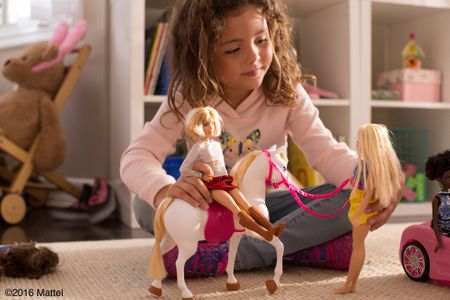 But as of today, it's out with thigh gap and in with the booty. Mattel, the creators of Barbie, have released three different body shapes in their new range, which include tall Barbie, curvy Barbie and petite Barbie, as well as seven different skin tones, 22 different eye colours, and 24 hairstyles. This massive change is helping young girls to see themselves in the toys and, let's face it, making ol' Babs much more relatable.

The change comes after a long-running criticism of the Barbie body shape. ​Girls have long wanted to be like Barbie and, in a nice twist of fate, Barbie now wants to look like us. It's a small step for mankind but a giant step for the doll. Mattel are hoping that the all-new Barbie, who is currently featured on the front cover of TIME magazine, will help not only to boost low-falling sales, but also help to make young girls feel more accepting of their own bodies.

What do you think of the new Barbie? Let us know! @sofeminineUK

​Barbie Are Launching A Dreadlock Doll In Honour Of Zendaya