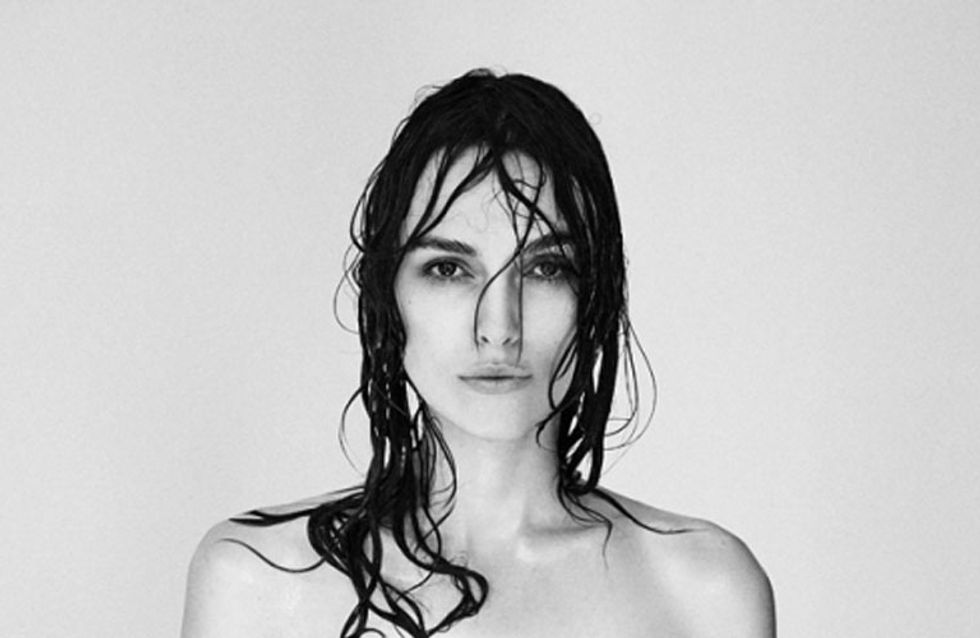 Keira Knightley is over Photoshop and you should be too!

In an unexpected move, Keira Knightley decided to bare all in the September issue of Interview Magazine. Her reasoning? She's tired of being Photoshopped on movie posters (the famously small-breasted Keira had a noticeably larger chest on the King Arthur promo images) and photoshoots.

No one's denying that Keira has been blessed with a body that society privileges. Yet, throughout her successful career, she's gone under the Photoshop's knife many times and she's sick of it.

She spoke to Times newspaper recently on her decision to pose topless. ​"I’ve had my body manipulated so many different times for so many different reasons, whether it’s paparazzi photographers or for film posters. That [shoot] was one of the ones where I said: ‘OK, I’m fine doing the topless shot so long as you don’t make them any bigger or retouch.’ Because it does feel important to say it really doesn’t matter what shape you are.”

Per Keira's firm request, the images in the magazine have been left unedited.

We're happy Keira decided to criticize the heavy use of Photoshop in fashion mags and promo images. She says, "I think women’s bodies are a battleground and photography is partly to blame. Our society is so photographic now, it becomes more difficult to see all of those different varieties of shape."

Amen, girl! We hope that more female stars continue to speak up on the inaccurate and digitally-altered images of their bodies.

Do you applaud Keira's brave decision? Tweet us @sofeminineUK!

This Photo Series Proves That Pregnant Is Sexy
“Am I The Best Sex You’ve Ever Had?” The Most Awkward Conversation Between Couples You’ll Ever See
What Would Disney Princesses Look Like With Normal Waists?

Follow us on Pinterest!
You might also like
This Victoria's Secret Photoshop Fail Might Be The Worst Yet
by the editorial team
Unrealistic Much? See What Happens When Photoshop Wrecks Women In Famous Paintings
by Emmy Griffiths
Is This The Best Celeb Comeback Ever? See What Happens When Lorde Calls Out Photoshop Madness
by Maria Bell
The Naked Truth: Photographer Shows What Real Boobs Look Like Without Photoshop
by Maria Bell
Topless campaign for women's right to bare all
by the editorial team
Didn't win an Oscar? Get free vaginal rejuvenation instead
by Maria Bell
It's About Time! Students In The UK Will Now Be Provided With Free Tampons
by Pascale Day
WATCH: How the Media Failed Women in 2013
by Emmy Griffiths
How (And Why) To Say No: 11 Reasons Saying No Will Set You Free
by the editorial team
Next Time You Compare Yourself To an Instagram Bod, Remember This
by Helen Turnbull