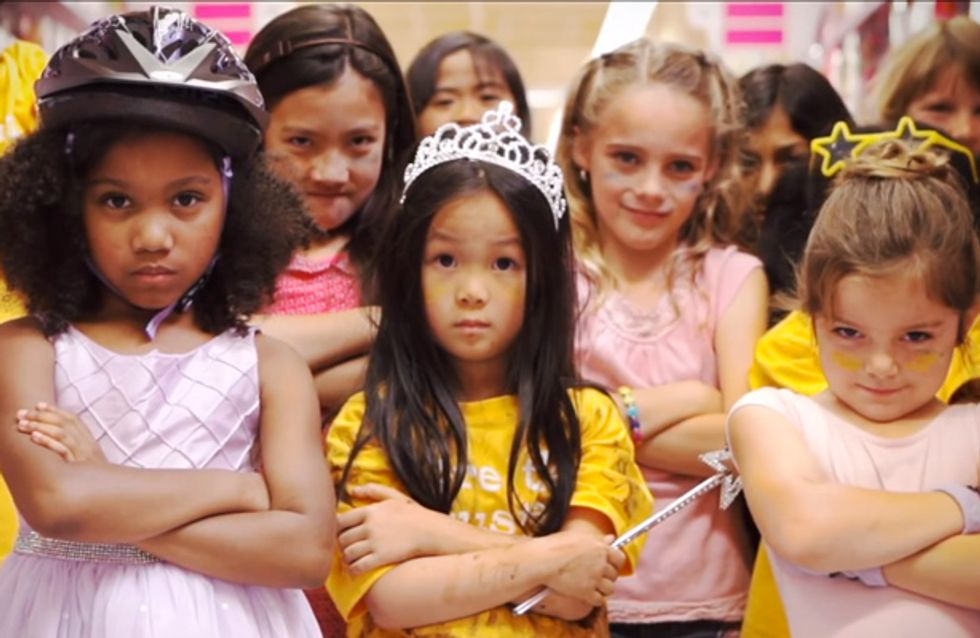 Feminism doesn’t have to be all straight-faced seriousness. Sometimes it can be more powerful to put a point across by tickling your funny bone rather than by being told off – which is exactly what these brilliant bunch of men and women have set out to do. These parodies use the Trojan horse of humour to help underline the idiocy of inequality and spoof some of society's unfair stereotypes about women.

From a parody of Ariel the Little Mermaid singing about her right to equal pay, to Harry Enfield’s 1930s public service announcement that women should refrain from participating in complex conversations – these insightful viral videos contain a comical but critically important message about gender equality.

​We’ve rounded up our top ten funniest feminist tongue-in-cheek videos that have us in stitches every time we watch them. We hope you’ll love them as much as we do!

This genius Robin Thicke 'Blurred Lines' parody made by three Auckland law students is a shot-for-shot take on the sexist original, but with a gender reversal and scathing lyrics. It was ironically banned for indecency, but after global uproar YouTube allowed it to be put back up.

Our fave line? "I apologise if you think my lines are crass, tell me how it feels to get verbally harassed."

We love famous men who champion the feminist cause, including comedian Harry Enfield who made this hilarious sketch lampooning male attitudes to women.

"The lady has foolishly attempted to join the conversation with a wild and dangerous opinion of her own! What half-baked drivel!" - Oh the horror!

A grown-up - and clearly world-weary - Ariel from The Little Mermaid is finding life on dry land more difficult than she thought it would be. With back-up from all the other Disney Princesses, Ariel sings about the gender pay gap and wonders why Princes are paid so much more.

Funniest lyric: ​“What's a penis and why does it - what's the word? - EAAAAARN?”

Taylor Adele Smith's make-up tutorial video is a tongue-in-cheek parody of some of society's crazy stereotypes about feminists. Her make-up application instructions combined with feminist observations are a powerful and brilliantly funny way of raising some very important issues about inequality.

For example, "Next we're going to use a light foundation. Make sure you give every part of your face a fair and equal amount of representation, unlike the government and prime time network television."

The Armpit song by Siwan Clark highlights the exhausting list of things that most girls do to look 'natural' and 'normal'. Incredibly catchy and pretty damn funny, the video features some poor bloke trying his hand at leg waxing - obviously with hilarious results.

“Oh my god, my eyebrows need plucking, and oh my god my legs need shaving, my pores need cleansing and my skin needs toning, my boobs need padding and my hair needs combing and…oh my god, I know a girl who shaves her arms – she's got arm stubble, we're really in trouble."

GoldieBlox Breaks into Toys R Us

This bunch of adorable kick-ass girls are challenging gender norms about what kind of toys girls like to play with, whilst belting out their own version of Queen’s ‘We Are The Champions’.

Sung to the tune of Lady Gaga's Bad Romance, this brilliant group of women pay homage to Alice Paul and the generations of brave American women who joined together in the fight to pass the 19th Amendment, giving women the right to vote in 1920.

"You know we don't want to take freedoms from you…Just want our rights and nothing less" - Sing it ladies!

College student Clara Beyer created a Twitter account called Feminist Taylor Swift, where she mashes together famous Taylor Swift lyrics with feminist rhetoric. The resulting popularity led to this video, which immediately went viral because it's so side-splittingly funny.

Sing along in your best Taylor Swift voice - "I guess you didn't care and I guess I liked that, but now I reject the idea that apathetic men are sexy, because I deserve respect!"

Louis CK: ‘There is no greater threat to women than men’

This joke from Louis C.K. doesn't just make you laugh, it sticks with you long after he tells it. Explaining to his audience the bravery involved in a woman accepting a date, he highlights how violence against women is still such a global epidemic.

In an effort to get men to understand a woman's experience on a date, he says: "Try to imagine that you could only date a half-bear, half-lion. ‘Oooh, I hope this one’s nice.’”

What Do Feminists Have Left?

In this episode of The Factuary, the host Guy Branum takes us through the years and shows us all women have accomplished and overcome, while simultaneously pointing out that there's a still a very LONG way still to go.

Our favourite argument: ​“That ladies and gentleman, is what we like to call a good old fashioned slut-shaming. No one ever tells Matthew McConaughey he’s begging to get raped and he hasn’t worn a shirt since 1993.”

Which is your favourite funny feminist video? Tweet us @SofeminineUK