by Dagney Pruner Published on 9 March 2015 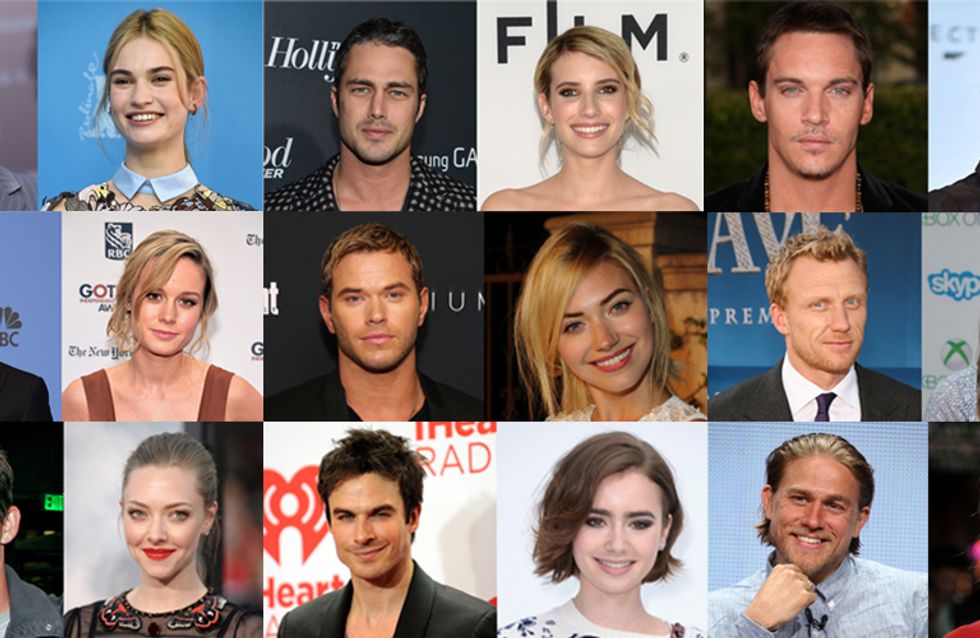 You may have heard that Jamie Dornan, Dakota Johnson and director Sam Taylor-Johnson are thinking about dropping out of the 50 Shades of Grey sequel. Although Dornan blames his wife for stepping out of the franchise, we think it may have to do with a few other things i.e. they hate each other, awful reviews, etc. So here are top 10 picks for actors that should replace the steamy duo. Please forward along to the new casting director, thanks.

Whether or not you have seen 50 Shades of Grey, you may be able to tell from the abundance of awkward interviews and awful body language on the red carpet that Jamie Dornan and Dakota Johnson have absolutely zero chemistry. Although it is only rumoured that the actors hate each other and may be dropping out of the sequel, we decided to do some investigating on the casting director's behalf and put together our top list for Christian Grey and Anastasia Steele replacements. Not to toot our own horn, but we think these need to be sent to the producers ASAP.

As you may remember, Charlie was the first one selected to play Christian Grey, but couldn't because of scheduling conflicts with Sons of Anarchy. Well, now that Sons of Anarchy is coming to an end, we think it's time to for Charlie to reclaim the throne and for indie starlet Mackenzie Davis to take the role of Anastasia Steele. She can absolutely slay the girl next door to glamorous transition, and we found her quirky courting of Miles Teller in That Awkward Moment absolutely adorbs. Let's resurrect the campaign for Charlie 2016.

I think we speak for everybody when we say Josh Duhamel needs to get back to the big screen so that he can grace us with his shirtless presence a la Win a Date with Tad Hamilton. We think Cinderella, aka Lily James, has proved she can absolutely slay the innocent angle, and quite frankly it's hard not to like her. Unlike the cast of the first film, both of these actors have shown that they can absolutely crush a press tour. Tad Hamilton and Cinderella forever!

Is it just me or has Jonathan Rhys-Myers has been out of the spotlight for far too long? We fell in love with him as the smoking hot football coach in Bend it Like Beckham, and we basically went through puberty again when we saw what moves he had in the sack in The Tudors. The only suitable counterpart for such a stone cold fox would be Lea Seydoux, who played the sultry assassin in Mission Impossible: Ghost Protocol and proved she knows EXACTLY what a red room is in the erotic film Blue is the Warmest Colour. Our only hope is that if they cast these two sexual beings that they release the sequel in 3D. Thanks in advance.

Although you may know Taylor Kinney best as Lady Gaga's fiance, he also happens to play a smoking hot fireman on Chicago Fire and was the sexiest werewolf EVER (sorry Tyler) back in the day on The Vampire Diaries. We think his perfectly chiseled face would be a perfect match for Emma Roberts, who has already proved she's a stud of an actress. Her ability to look sweet and innocent or totally sexxxy a la Madison in American Horror Story means she would absolutely kill it as Anastasia Steele. In this case, we think the werewolf and the witch would live happily ever after.

If you've ever seen The Vampire Diaries then you know if there is one thing Ian Somerhalder can do well, it's play a hot guy with a tortured soul. His brooding look alongside the quirky charm of paparazzi vet Lily Collins would be an unbeatable combination. We've also seen Ian's alter ego, Damon Salvatore, do a sex scene before, so we have complete faith he can turn up the heat in the bedroom, flogger included.

Chris Pine is so hot it honestly just makes me uncomfortable sometimes. I mean look at those piercing eyes, and don't even get me started on those pillowy lips?! He has yet to headline a blockbuster hit since Star Trek, and we think he would be a perfect fit for Christian Grey alongside Brie Larson. You may remember Brie as the adorkable girl that stole Jonah Hill's heart in 21 Jump Street and the student that wooed Mark Wahlberg in The Gambler. Come on people, let's put Chris' lips to good use.

Frankly, Kellan Lutz is way too hot to keep making these crappy action and/or Twilight movies, seriously, somebody make it stop. Imogen Poots on the other hand has been slaying the indie film circuit for a while and has yet to make her big blockbuster break sans her role in the Aaron Paul flop, Need for Speed. Imogen has the acting chops to give Anastasia some real depth and we don't think anybody would be able to pass up Kellan's abs, so, it's basically a match made in heaven.

Kevin McKidd has already proved he knows how to play a dark and twisty dude with his role as Dr. Owen Hunt on Grey's Anatomy and even though he's on the older side, we think he could pull off the young billionaire look. Elizabeth Olsen is not new to fame as she grew up as the little sister to the most famous twins ever: Mary-Kate and Ashley. Elizabeth is just starting to hit her acting stride scoring a role in the new Avengers movie, and we think she would play a fabulous virgin gone S&M. Also, let's be honest, gingers are SO HOT right now.

You may forever remember the day that one of our generation's greatest heartthrob's Paul Walker passed away, it was truly, truly tragic. Well his brother Caleb Walker helped stand in for the Paul's scenes he hadn't filmed yet in Fast and the Furious 7 and he is a spitting image of his handsome brother. We would love to see him carry on the Walker brothers' legacy alongside a starlet who doesn't need a full face of makeup to win over Christian Grey's tortured soul. If it's one things the Walkers know how to do well, it's how to make a sequel.

It's about time Nate Archibald got off the bench and started sharing his hotness with the world again, so what better way than to play a smoking hot billionaire with questionable fetishes? We think he would have some swoon-worthy chemistry with the House of Cards and Shooter smokeshow Kate Mara. Kate is one of the fan favourites of the men of the world and I don't know a single girl that didn't grow up with a crush on Nate Archibald, unless you were a fan of struggling writers or rich d-bags, and thus you were team Dan or team Chuck. You know you want to see these two in the red room, don't lie.

Who do you think would be a good replacement for the sequel? Tweet at us! @sofeminineUK

All The Signs Your Sexual Awakening Was Caused By A Cartoon