by Emmy Griffiths Published on 16 December 2015 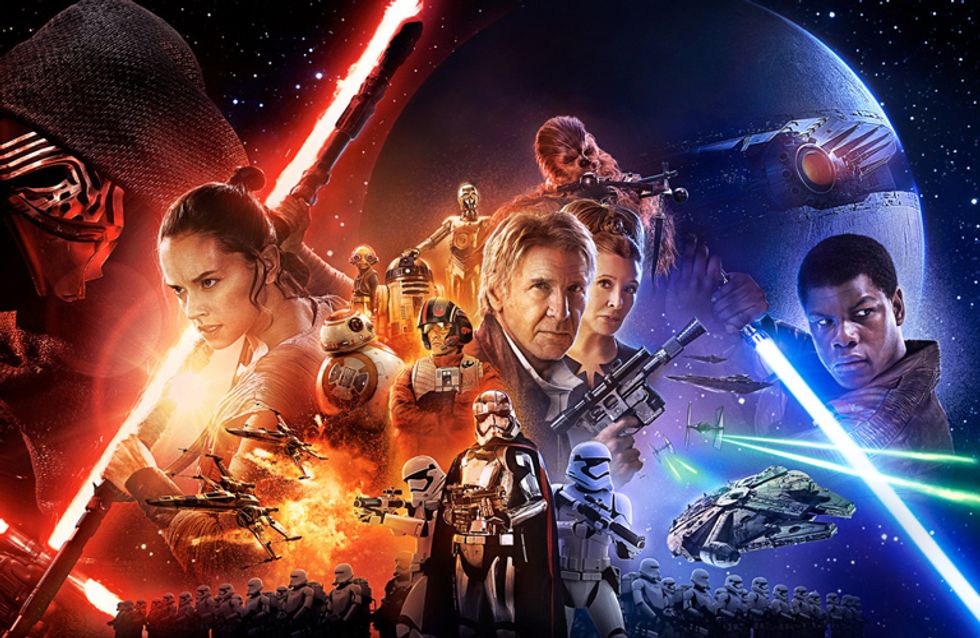 For people who have little to no interest in the Star Wars movies, it's difficult to see where all the borderline manic passion for the sci fi series comes from. That being said, the chances are that you will still be forced to see it in cinemas this year because let's face it, if you have no interest in this movie you're in the serious minority. But since we were lucky enough to see Episode VII early, here's why we're fairly sure it won't be the worst thing to happen to you...

This piece contains no spoilers.

One of the major reasons the prequels suffered so much - on top of cardboard acting and rubbish characters - was that the decision to delve into the politics of the galaxy was just unbelievably convoluted and way too confusing. Come on, we're here for a good time, not to watch the sci fi version of PMQs. The Force Awakens keeps it simple, but keeps you interested in doing so.

The new characters are just brilliant

John Boyega plays Finn, while Daisy Ridley plays Rey, our two new heroes of the new saga. We're not going to delve into their separate histories (spoilers etc), but we can guarantee that you will love them and their dynamic. Trust us, this is a pair you will be invested in straight away. Poe Dameron is also an excellent addition to the cast and really not too bad on the eyes, just sayin'.

It is beautifully shot, simple as that. It doesn't try to overcrowd you with: LOOK! LOOK AT THIS ALIEN AND THIS SHIP AND THESE WEIRD CREATURES! It just makes you feel like the place you are watching is real, and is without a doubt the most stylish of ALL the Star Wars movies (yeah you heard Empire Strikes Back). They also seriously hold back on the CG, which can only be a good thing and when they do use it, they use it WELL.

It passes the Bechdel test

The film passes the Bechdel test several times actually, and the best part is that the female characters in the movie are so widely varied and characterised that you're not waiting for this moment with your arms crossed, you just expect it to happen. Of course they're not going to be talking about men when they have so much more important things on their plates!

The old characters are used perfectly

For those who didn't much fancy watching a feature film with a reluctant Harrison Ford and Carrie Fischer reciting stale lines at each other, you're in for a treat. The characters make way for the new ones, as well they should, but they're also important to the plot and are treated as such. And of course we get our fifteen minutes in heaven with good old Han Solo.

You can watch it without having seen all the movies

Yep, believe it or not, this film stands alone without falling back on it's predecessors. Sure there are some throwbacks to the original trilogy, but overall don't worry, you won't need to spend approximately 12 hours catching up on the first six before you see this one. If you do want a quick summary though, we've got you covered.

That little orange and white ball that seems to be plastered on everything everywhere is the single cutest character to come out of the movies since that big eyed lemur from Madagascar. When we saw it in the cinema, there were audible 'AWWWs' coming thick and fast from the audience (including us, obviously).

It's funny without being irritating (we're looking at you Jar Jar)

All respect to George Lucas for inventing the Star Wars universe and everything, but since his sense of humour tended to be based on square robots and truly annoying amphibian-esque aliens, we're not sorry that this movie is lacking in trying to get laughs with slapdash humour and instead there are some brilliantly well-placed moments that'll give you a genuine laugh.

The acting is top notch

Move over Hayden Christensen, there are a bunch of new leads in town, and they are incredible. We can't say much without giving too much away, so we'll just say that Daisy Ridley, John Boyega and Adam Driver were chosen for a reason, and they are simply faultless.

It'll leave you wanting to see it again

Yep, even you, the Star Wars cynic. There's just too much to like about this film, even if you're not a die hard fan of the franchise. You'll also be wondering about when Episode VIII is due to come out. May 2017 guys. May 2017.

Are you looking forward to The Force Awakens? Tweet us @sofeminineUK!