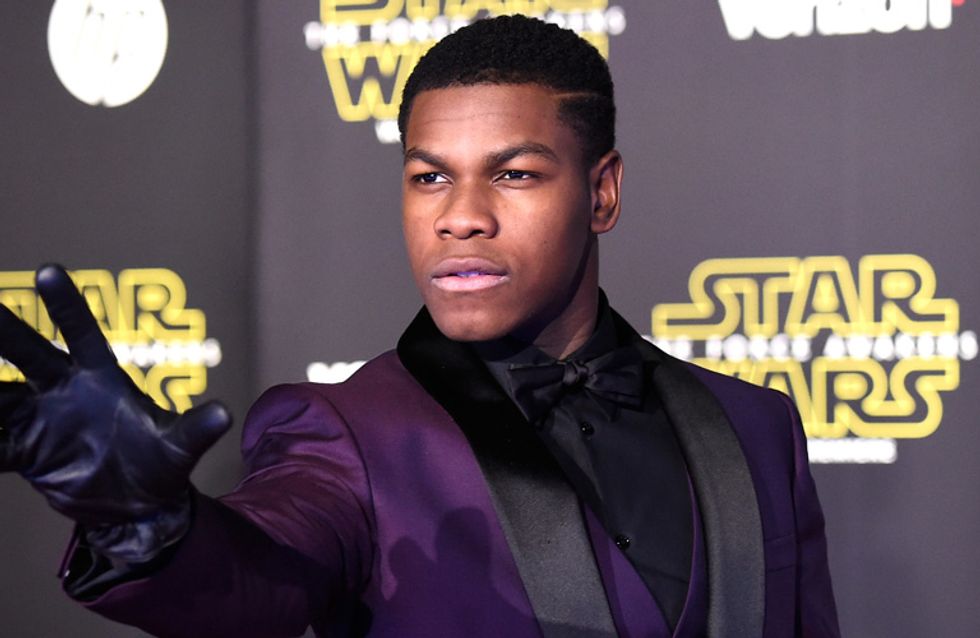 If you have yet to watch Star Wars: The Force Awakens, chances are you are not yet acquainted with the incredibly talented, hilarious and all-together beautiful human being that is John Boyega. For everyone who HAS watched it, let's all agree that he is a precious cinnamon roll with a heart of gold, okay?! Here're all the times we fell a little more in love with the galaxy's sexiest stormtrooper...

The time he talked BB-8 off a ledge

Would we were one of the hysterically laughing girls off-camera. If we were there squawking loudly at his jokes, maybe he'd notice us and take us to dinner. Is...is this how stalkers think?

The press tour got to BB-8 but so glad I was able to help ! pic.twitter.com/xwxV4UjtJv

When his Harrison Ford impression was perfect

If you're sick of celebs saying the usual: "I loved working with him. He's such a down-to-earth, approachable guy", then John is DEFINITELY the one for you. We feel like we were almost in that restaurant ourselves,watching Harrison survey his surroundings slowly and majestically.

And their ongoing best friendship, obviously

Say it enough and it'll come true John. We think that's what he's going for anyway.

When he made good use of his special Twitter emoji

Both dedication to your art and taking your punishment like a man.

Is it just us, or is John really enjoying this whole 'I'm a main character in Star Wars' thing?

Two unsuspecting SW fans watching the trailer before the movie. Had to interrupt. pic.twitter.com/9k7GFAyBMq

When he fangirled over David Beckham

ONE OF US ONE OF US.

When his character Finn and Poe Dameron were bros

We won't go into too much detail to avoid spoilers, but Finn and Poe's friendship is just EVERYTHING.

To be fair, if you had a main part in the biggest franchise of all time and you were at the Star Wars Premiere with all of your best friends, you'd kick off too.

Thee moment from tonight at the Star Wars Premiere -https://t.co/cRLgo6zh4Z -the film is everything you want it to be 👊🏾

Lord of the Rings and Star Wars TOGETHER? Nope, can't do it.

Childhood memories with @IanMcKellen Weeks before guildhall speech exams. His words stuck with me, thanks sir. pic.twitter.com/3skpfUyzjM

Are you a fan of John Boyega? Tweet us @sofeminineUK!