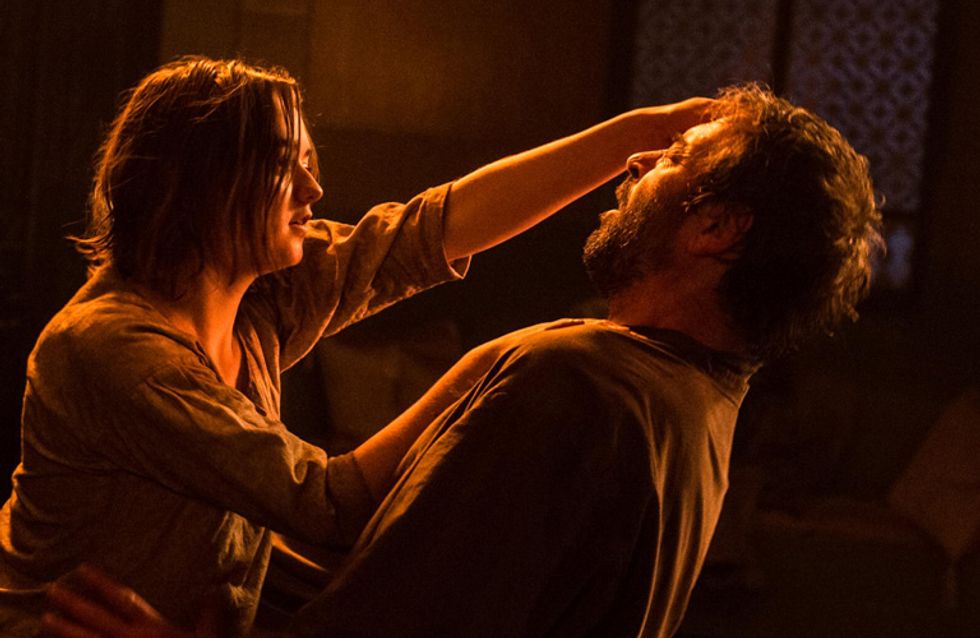 Since Game of Thrones kills off roughly a couple dozen named characters and about three or four major characters per season, you are a sweet summer child if you think season six is going to come and go without the God of Death rearing his head. So who made our kill list? Here are our predictions...

Not only is Lady Olenna the only intelligent Tyrell with any power left, she has no one to barter with anymore, especially with Tywin, Littlefinger and Varys out of the picture and the religious order in control. She is also a source of comfort and security for Margaery and Loras, and it's clear that season six is not going to be their happiest.

We're not sure if it's going to simply old age or perhaps one of Littlefinger's spies (she did threaten to reveal he was responsible for Joffrey's murder after all), but something tells us season six will be Olenna's last.

P.S. She's also a fan favourite, and we all know how they turn out! #RIPGreyWind

Loras has been successfully outed as a "sword swallower through and through," as Lady Olenna would say, and sadly the religious order of the Sparrows does not take kindly to Loras's sexual preference.

The last we saw of him he was being thrown into a dungeon, and we have a feeling that he will not fare well in his trial. Could Loras be next to be executed at the Sept of Baelor? Discuss.

If the flashback to Cersei's fortune telling as a child is anything to go by, all three of her *air quote* 'Baratheon' children are to die. Since Joffrey and Myrcella are super dead (both by poison, incidentally), then all it's going to take is Tommen's demise for the prophecy to be filled. Since the witch has already been right twice, you can be rest assured it will happen sooner or later...

Anyone expect Ser Davos to let Melisandre live for much longer after she reveals she burned Princess Shireen at the stake? If she has any sense she won't mention it, but who knows? Maybe Davos will guess.

Of course we need her around for a little longer to use her witchy powers for good *cough* Jon Snow *cough*, but then we really wouldn't mind Davos taking care of her.

Our sweet, husky voiced J-Bear has grey scale and is not long for this world. There's no denying that season six could well be this last, unless there is some as of yet undiscovered miracle cure for that nasty ass greyscale he caught in season five. Poor old Jorah the Explorer doesn't deserve it, but there you go.

The resurrected Gregor Clegane can't be allowed to last as an unbeatable undead monster for too long, right? Just think of how that would complicate the plot! Instead, we think he is going to meet his maker at the hands of his younger brother, The Hound, who will win. GET HYPE.

Ser Bronn of the Blackwater is so much fun, but he has managed to climb up the ladder of chaos and now he can't climb much higher. He's a fan favourite who is much too close to the Lannister clan, and if you hadn't noticed they are really not doing too well right now. Either he disappears sharpish when he reaches King's Landing, or we're guessing he won't be around for a whole lot longer...

If Sansa, as we suspect, finds herself in a real position of power in season six, it may finally be time to get revenge for her family's death, and that means killing TF out of Walder Frey.

Technically the Wardenness of the North, as a Stark and with her brothers presumed dead, it makes a lot of sense that Sansa would rally loyal Northmen together and go to fight. #TheNorthRemembers.

Gilly is a distraction that Samwell Tarly doesn't need. He's a sworn Brother of the Night's Watch, and so it's fair to say that there's only so much longer he can look out for Gilly in Old Town, particularly if he stays true to his vow and returns to Castle Black but then again he's also promised never to leave her side. There's only one option we're afraid. #ValarMorghulis.

As honourable as Brienne is, she's gone and f***ed up countlessly. She fails Renly, Catelyn Stark, and finally Sansa after she avenges Renly's death by killing Stannis rather than keeping watch in case Sansa needs her help (which she does, SHE DOES!) Brienne is all alone with poor old Pod in the middle of a failed battle which the Boltons won, and we're guessing they'll not be kind if they find her (remember last time?)

We don't care how it happens, that sadistic little sh*t has to go or we'll reach through our screens and do it ourselves. Theon, we're expecting you to step up here, but really ANYONE will do. Just kill him please.

Let's face it - if it wasn't for Alliser Thorne and his solid hatred of Jon Snow, our favourite misery guts probably wouldn't be bleeding out on the cold hard ground right now. Alliser has been out to get Jon ever since he arrived at Castle Black, and seemed to use his alliance with the Wildlings as an excuse to commit mutiny. We're guessing he is going to be deaded by Ser Davos as soon as humanly possible, and it's going to be epic.

How much longer can Pycelle last, really? Does anyone like him anymore? We're pretty sure that he is out of allies and with the uprising of the Sparrows, his position as Grand Maester has been threatened. So what could his purpose be from season six on? Get rid.

He 100% without exception absolutely HAS. TO. GO. There is actually an entire subreddit dedicated to how much everybody truly loathes this character. There is a solid argument that he is hated worse than Joffrey and Ramsay combined. Screw you Olly.

Who do you think is going to die in season six? Tweet us @sofeminineUK!