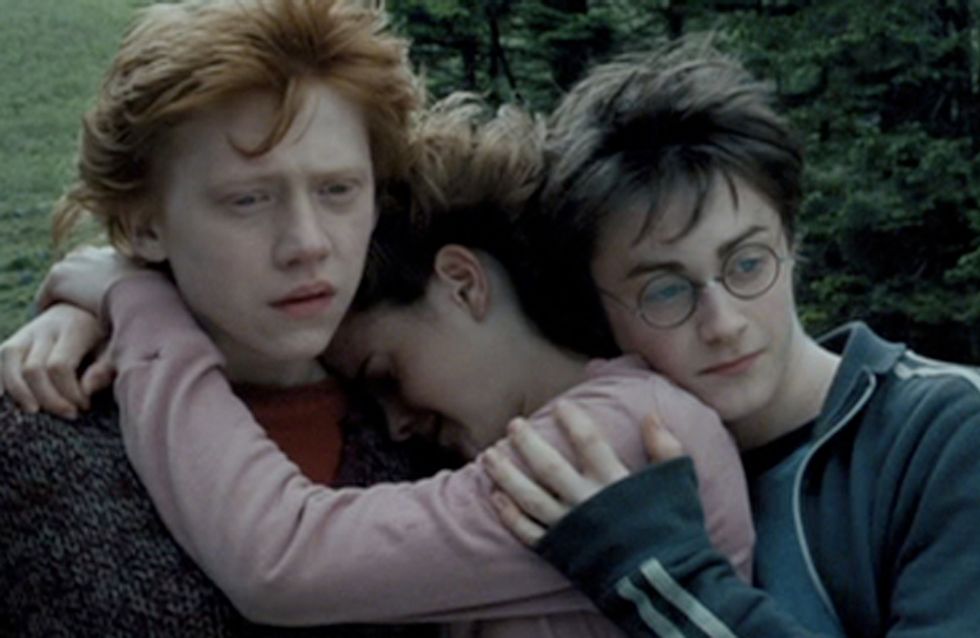 Harry Potter is full of good defeating evil, but that doesn't mean it's all smooth sailing. Here are all the moments when the wizarding world got way, way too real...

1. When Harry sees how his parents were murdered

In The Goblet of Fire, Mad Eye Moody shows them the killing curse, which was used on Harry's parents...

"So that was how his parents had died. . . exactly like that spider. Had they been unblemished and unmarked too? Had they simply seen the flash of green light and heard the rush of speeding death, before life was wiped from their bodies?"

2. When Hermione realised that no one likes her

She cried in the bathroom and was attacked by a troll because of what you said Ron! FFS RON!

3. When Harry is forced to write lines in his own blood

"Harry left her office without a word. The school was quite deserted; it was surely past midnight. He walked slowly up the corridor then, when he had turned the corner and was sure that she would not hear him, broke into a run."

4. When Ron couldn’t afford anything from the train and didn’t want Harry paying for him

"On second thought, just the droobles."

5. When Harry has a breakdown after Sirius died

“I DON’T CARE!” Harry yelled at them, snatching up a lunascope and throwing it into the fireplace. “I’VE HAD ENOUGH, I’VE SEEN ENOUGH, I WANT OUT, I WANT IT TO END, I DON’T CARE ANYMORE —”

6. When Draco calls Hermione a mudblood

7. When Ron abandons Harry and Hermione

9. When Harry refuses to let go of Cedric after bringing his body back from the graveyard

10. When Ron was forced to hear a fake Harry and Hermione say everything he secretly feared

11. When Harry sees his family in the Mirror of Erised

He was such an unloved child! SOMEONE HOLD HIM.

"Mrs. Weasley set the potion down on the bedside cabinet, bent down, and put her arms around Harry. He had no memory of ever being hugged like this, as though by a mother.

The full weight of everything he had seen that night seemed to fall in upon him as Mrs. Weasley held him to her. His mother's face, his father's voice, the sight of Cedric, dead on the ground all started spinning in his head until he could hardly bear it, until he was screwing up h is face against the howl of misery fighting to get out of him."

13. When Molly is trying to get rid of the boggart that looks like her children, dead

14. When Lupin and Tonks died, leaving their baby an orphan

Damn it you two, you had a newborn! You had no business being in that battle! *Sobs hysterically*

15. When Harry sees his father attacking Snape and realises he wasn’t the man he thought

'What was making Harry feel so horrified and unhappy was not being shouted at or having jars thrown at him — it was that he knew how it felt to be humiliated in the middle of a circle of onlookers, knew exactly how Snape had felt as his father had taunted him, and that judging from what he had just seen, his father had been every bit as arrogant as Snape had always told him.'

16. When Harry, Ron and Hermione unwittingly see Neville visit his parents who have been tortured into insanity

This is arguably sadder than Harry's backstory. Poor old Neville.

17. When Ron was screaming for Hermione as she was being tortured

"Hermione’s screams echoed off the walls upstairs, Ron was half sobbing as he pounded the walls with his fists, and Harry in utter desperation seized Hagrid’s pouch from around his neck and groped inside it."

18. When Harry broke up with Ginny for her protection

"She did not cry, she simply looked at him."

19. When Lupin holds Harry back as Sirius fell through the veil

20. When Fleur declares she’s going to marry Bill despite his werewolf attack

'“You thought I would not weesh to marry him? Or per’aps, you hoped?” said Fleur, her nostrils flaring. “What do I care how he looks? I am good-looking enough for both of us, I theenk! All these scars show is zat my husband is brave!"'

This courtyard scene was way, WAY too hard to watch.

22. When you realise this is the only time Fred and George will grow old together

All of the nopes.

What do you think is the saddest Harry Potter moment?! Tweet us @sofeminineUK