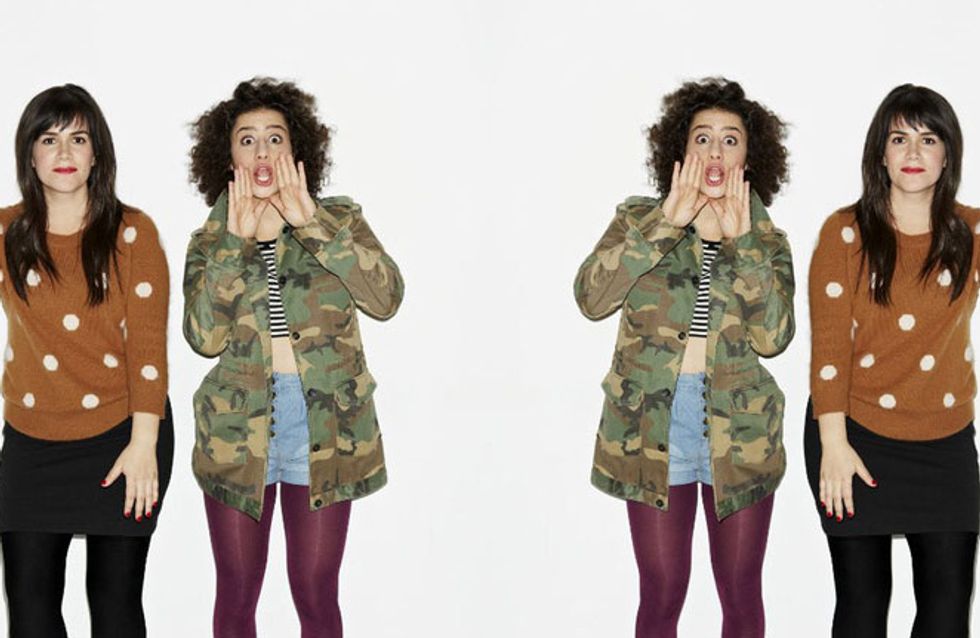 Anyone who ever said women aren't funny are totally, utterly wrong, and I have strong anecdotal proof. This is a great time for women in comedy, with broader and more diverse female characters popping up all the time. And these characters? Yep, created by women. Who run the world or, at least, Hollywood? Girls. Gurrrrls. Here're our favourite funny ladies that are making us laugh now and 4eva.

Written by and starring Ilana Glazer and Abbi Jacobson, Broad City has been hailed as the show for millennial women. It is a show that perfectly sums up being a twenty-something in today's world: Abbi and Ilana are obsessed with their friendship rather than their relationships with men. The men in their life come secondary to their friendship, and that is perfectly reflected in the show - sometimes you hear about the people they have slept with in an offhand comment, and won't hear anything else about it. There's no analysing relationships like the girls of SATC. There's no backstabbing like in Girls. They're just two believable friends trying to navigate life on minimum wage jobs in New York Citaaay.

The comedy baby of Tina Fey and her writing partner Robert Carlock, 30 Rock was an exaggerated version of Fey's experience working as head writer at SNL. Filled with plenty of nerd jokes and Alec Baldwin - swoon - the show managed to keep it fresh until the end of its 7 year run. Written and acted perfectly by Tina Fey herself, Liz Lemon was weird, nerdy and heroic, not to mention a hardworking boss, and the show was able to comment on so many serious topics by putting a surreal slant on it. Like the episode where Tracey Jordan (played by Tracey Morgan) found out he was from white ancestry. The series was quick, witty, and contained the line “Jay-Z was right about New York. Concrete bungholes where dreams are made up, there’s nothing you can do.” What more could you want from a sitcom?

Girls propelled its writer and star Lena Dunham into the spotlight, mostly due to her down-to-earth portrayals of sex and nudity. It was a landmark TV show that was unapologetic for its realistic sex scenes, and the criticism that Lena received about her body only made her take her clothes off more, which in turn made our love for her swell to massive proportions. This was a show for the post Sex And The City generation; the struggling twentysomethings, fresh out of University without an effing clue, soon realising that living in NYC wasn't all Cosmopolitans and swanky art shows. It encapsulated the minutiae of female friendships, the push-pull relationship between a post-grad and their parents, the constant struggle of a non-relationship with someone you care about. Lena Dunham managed to bottle the twentysomething experience perfectly. As her character Hannah Horvath says: "I don't want to freak you out but I think that I might be the voice of my generation. Or at least a voice of a generation."

Jane Villanueva is a hard working, religious Venezuelan woman played by Gina Rodriguez, who vowed to save her virginity but is accidentally inseminated in a mix up. What's worse, the biological donor is a married man, a former playboy and cancer survivor who is not only the owner of the hotel where Jane works, but was also her former teenage crush. Developed by Jennie Snyder Urman, the comedy is told as a telenovela, and has received critical acclaim. Its star, Gina Rodriguez, also won a Golden Globe for her role. It's kinda silly, but heartwarming and insanely addictive.

Written by and starring Mindy Kaling, you know that The Mindy Project is going to be good. Mindy's previous writing and acting gigs include The Office, which ran for a whopping 10 series and was a massive hit in America, so you know that, with Mindy being her own boss and all, The Mindy Project is in good hands. Mindy has previously been praised for helping to change the portrayal of leading ladies in a sitcom, for the fact that her size or ethnicity has no effect on the way her character is. Real Mindy plays fictional Mindy as confident, sexy and committed to her work, and for that, we love both Mindys.

Created by Liz Meriweather, starring Zoe Deschanel, and written by Kay Cannon, this show is a witty female extravaganza. Liz previously wrote the comedy film No Strings Attached starring Ashton Kutcher and Natalie Portman. Kay Cannon has written on every good comedy under the sun, including 30 Rock and the fantastic Pitch Perfect films. And we all know who Zooey Deschanel is, because she is queen of our hearts. The series sees Deschanel as Jess, who is quirky and sweet, which critics were at odds with when the series first started, but were charmed by her warmth and good-hearted nature which is what the show embodies.

Have you got any other fantastic funny ladies to add to the list? Let us know! @sofeminineUK

WATCH: The Trailer For Miss Peregrine's Home For Peculiar Children Is Here And Looks Amazing

100 Episodes Of New Girl: Why It's Still Our Favourite Comedy