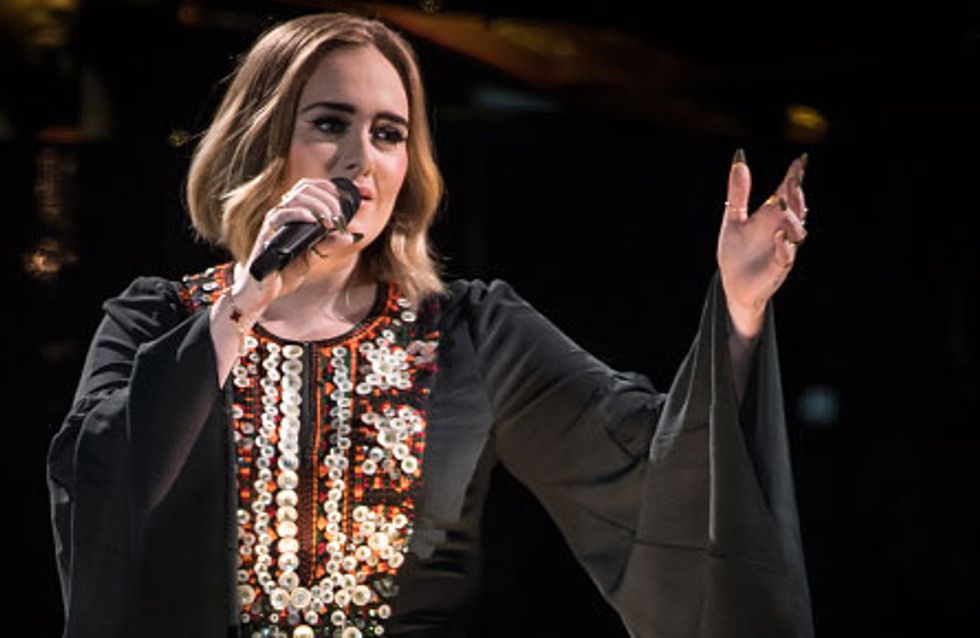 She's a one-woman superhero/powerhouse/legend and everything she does whether that be belting out bangers, to being the most down to earth celeb in showbiz, Adele always knows how to keep it real. Much to our joy, her Glastonbury performance was no exception. Here's 8 times Adele totally slayed #Glasto.

It's been another amazing year at Britain's most famous festival Glastonbury, and together with the many inches of mud and 10-hour traffic jam to get to the farm, the part we really can't stop talking about was queen Adele's badass performance. True to form, she totally killed it and brought way more than just those talented pair of lungs to the stage - her down to earth humour and personality made it one to remember.

So as we pack away our wellies and tents for another year, and take yet another shower, let us count the ways Adele stole the show and delivered the headline performance of her career... ​(and our entire lives)!

She swore a grand total of 33 times during her set, giving a metaphorical middle finger to the BBC who she admitted had put her on a swearing ban ahead of her set. I think you'll agree that this just made her all the more hilarious as a result.

Tbh we'd be busting for a leak too if we had gotten there early enough for a front row spot.

3. When she took a selfie with an excited fan

After inviting one of her fans up on to the stage with her, Adele posed with the excited ten-year-old girl for a souvenir selfie of the amazing moment. Talk about life made. We've never been so jealous of a child.

4. Then belched in front of said fan's face

And blamed it on the 'dirty burger' she'd eaten prior to her performance. Seriously, can she run for PM thank you please?

5. The way she looked incredible

Quite rightly showing off her amazing weight loss in all its glory, the stylish star opted for a black embellished dress with jewels and sheer billowy sleeves. Complete with her trademark talons obvs.

6. When she got honest about her pregnancy body

You may remember that she didn't treat us to a vid for her Bond theme track Skyfall, and Adele used this performance as her opportunity to tell us exactly why, and her reasoning just made us love her even more. She said: ​ ''I didn't want a video [for the song] because I was nine months pregnant and I was about to drop," she said. "And I don't look like Halle Berry. You don't want to do a video for a Bond song if you don't look like Halle Berry." Who wants to look like a Bond girl anyway? Adele, you have our heart for life.

7. When she proved even she makes mistakes just like the rest of us

The singer cut her track 'River Lea' short, asking her band to start from the beginning as she had made a mistake. "Can we start that one again? I'm out of breath, I'm not used to all that dancing!" she said. "Also it's an excuse to wipe my sweaty top lip." We've all had a bad ol' case of SUL, just not singing in front of thousands of people at the time, sadly.

8. When her closing track gave us goosebumps

Her faultless (naturally) rendition of 'Someone Like You' was super emotional. First she showed off that incredible voice of hers with a note perfect tune, then shared her joy at finally performing the famous festival. Calling it 'a dream' she excitedly told the packed crowd, "I did it!" We've had to restock on Kleenex cos we were one big emotional mess too.

What did you think of Adele's performance? Let us know @SofeminineUK!

The Best Outfit Ideas For Your Festival Style

14 Times Vanessa Hudgens Was The Queen Of Coachella Festival