All The Best Bits From The MTV VMAs 2016 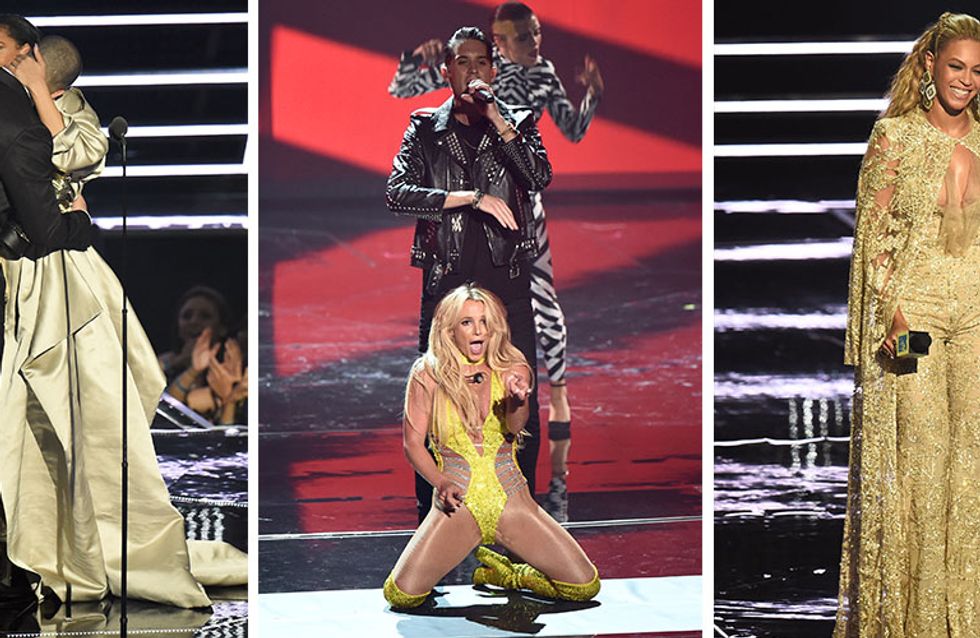 The MTV Video Music Awards is always an event that manages to top the show from the year before. Choc-a-bloc with Olympians, declarations of love, a very giggly Chance the Rapper and plenty of awkward romantic advances, this year's effort did not disappoint. Come gawp and cringe at the highs and lows of the VMAs 2016.

Ok, let's just get this out of the way now. Last night, as with every major awards ceremony, was essentially The Beyonce Knowles Show. We know it. She knows it. MTV knows it. Laurie Hernandez sure knows it. (You've probably forgotten what else happened at the VMAs on Sunday - don't worry, we're here to remind you, below.) Bey performed a mini Lemonade medley and it was 17 minutes of pure Yonce goodness - the kind of goodness that's similar to getting fresh air or eating your five a day: essential to your wellbeing, recommended by doctors (probably), but instead of providing you with extra vitamins, it bolsters you with SASS. In a two-and-a-half hour show, MTV gave Bey 11% of the whole show. (Yes I worked it out. On a calculator.). That's how much MTV trust Beyonce. They gave her the lion's share of performance time.

As usual, she did not disappoint. There was slow bits and fast bits and angry bits. There was a overzealous fan who had to be held back. There was a brief hark back ​to Countdown. What's that? A baseball bat?! Yaaas, get it gurl! Y'see, MTV let Beyonce do that. They let her smash expensive cameras. She is the only person who can increase the price of a camera by smashing it to bits.

Well, that was awkward wasn't it? Drake, laying his heart bare to the world, confessing his feelings for Rihanna to a room full of his peers in a tux, only for RiRi to duck out of a kiss at the end - or, as everyone seems to be calling it, "curving." It was like when one of those flashmob proposals go wrong. But alas, all is well with Drianna (their relationship portmanteau), after videos from a different angle show that Ms Fenty did indeed kiss Drake back. Phew!

Ariana's on a bike

Ariana Grande automatically made us all feel incredibly guilty for watching the VMAs whilst eating a grab bag of Doritos from the comfort of our sofas when she decided to simultaneously sing and partake in a spin class at the same time. How she managed to do runs like that whilst cycling when the only noise we can make in our spin sesh is a weak yelp of exhaustion means that it's time to hit the gym twice as much this week - but only if the guys there will be wearing those fetching pink unitards like Ariana's backup dancers.

Chance the Rapper reacting to being photobombed by Beyonce is all of us. He was mid interview when Bey snuck up behind him and rested her head on his shoulder. Chance proceeded to freak out, forgetting about his interview responsibilities and chased after Queen Bey. He came back eventually, only to shout "This is my life!" into the camera. Interviewer Meredith Graves managed to keep it together, having a brief convo with Bey about being a Virgo, but is essentially rendered speechless. It just goes to show the power of Yonce: it doesn't matter who you are, you're going to fangirl.

Kanye West was at the VMAs, as he often is, and he came back ready to stir some sh*t. He was actually supposed to be there there to present his new music video for Faded but, he said, "before I do that, Imma talk." Cue audible groans from living rooms around the world. Because everyone knows when it comes to Kanye, it's never just light chit chat. It's never just water-cooler natter. It's deep. So deep, and confusing, and boring. So boring, in fact, it could be used to send babies to sleep if there wasn't so much cussing and constant changes in volume. He takes six minutes - six whole minutes - to introduce the video as a whole bunch of half-formed thoughts tumble from his mouth, stuck in between a lot of shouts of "bro!". We still have no idea what anything said during those six minutes meant, but we hear the guys who helped crack the Zodiac code are on it.

Halsey and Chainsmokers got closer than close

Uh-oh. It's Meghan Trainor and Charlie Puth all over again. Halsey joined The Chainsmokers on stage to perform their hit Closer, but it got a little bit too close for our liking. The pair flirted up a storm as they sang, making every single viewer feel like they were third-wheeling on the most uncomfortable date of all time - the kind where the couple waits until you've gone to the toilet before they abandon you to go home and have sex. Just no. Save that energy for backstage please.

Let's just say what we're all thinking: Britney was miming. She mimed on Carpool Karaoke, and now she's miming at the VMAs. That's Britney, bitch. We can accept it. What we can't accept, is yet another performance filled with uneven sexual tension. Drake and Rihanna grinding on one another, fine - we know that that attraction is mutual and we're rooting for those kids. But G-Eazy trying to flirt with Britney is kinda painful - it's like she told him not to backstage but he decided to do it anyway. She's been there and done the MTV kiss already, so give it a rest yeah?

When VMA presenter Jimmy Fallon took to the stage dressed as disgraced swimmer Ryan Lochte, there was one person who was very clearly loving it, and that was fellow swim bro Michael Phelps. After a bunch of over-exaggerated statements ("I'm the one who gave Adele the flip phone..."), Jimmy announced that Beyonce had won the MTV moon man with Formation for Video of the Year. His new alter ego continued, "They’re all so great and so talented, I couldn’t choose. I couldn’t tell you even if there was a gun to my head. Which, there isn’t, but I couldn’t choose — I still couldn’t choose," as Phelps was seen mouthing "oh my god!" and filming the impression on his phone.

Ansel Elgort is obviously going through something

Oh Ansel. You ok hun? The handsome actor turned up in some weird, Edward Scissorhands getup and he did not seem to be down with it. Looking supremely uncomfortable and unsure what to do with his arms, Ansel - who is more used to dressing in the frat bro uniform of backwards cap, no shirt and baggy grey Nike shorts - posed awkwardly in studded fingerless gloves and trousers that seemed to be covered in cobwebs. Apparently it's Dior Homme Spring/Summer 2017, but we're not entirely convinced he didn't fall backwards into a time machine that landed him slap-bang in the dressing room of My Chemical Romance circa 2005.

What were your fave moments from the VMAs? Let us know! @sofeminineUK

WATCH: Rihanna Asked A Fan To Sing FourFiveSeconds & Her Reaction Is Amazing

The Best Celebrity Workout Pics! 'Cos If You Didn't Take A Gym Selfie, You Never Went Right?