Angelina Jolie has showed off an addition to her extensive tattoo collection. The actress is down under to start work on her new movie and flashed her newly inked forearm. It appears to be more Arabic script - a favourite of Ange's.

Angelina Jolie has debuted her latest tattoo while on location in Sydney, Australia.

The inking appears to be a lengthy piece of script and is placed just below the Arabic symbol on her right forearm.

Ange is certainly not afraid of the tattoo needle and has an extensive collection across her body.

The star showed off the etching which sits alongside the symbol for determination as she strolled along the docks in Oz.

Angelina has at least a dozen tattoos, some covering huge portions of her body.

Many of them have significant meaning to the actress with dedications to her children, faith and interest in other cultures.

She often uses tattoos as markers for important moments in her life.

She of course, recently completed a double mastectomy and is doing well and getting back to work.

The 38-year-old is in Sydney filming for her new movie Unbroken.

This will be her second effort at directing.

She has taken her huge brood with her to the land down under while Brad finishes up projects in the UK.

She took her huge family to visit the Sydney aquarium in between working on her new flick.

The world is still waiting for the A-List couple to tie the knot after becoming engaged last year. 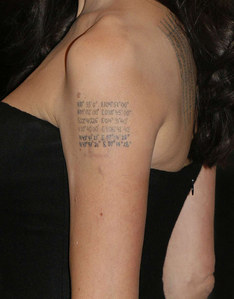