It turns out that Victoria Beckham and Kate Middleton have a lot more in common than both being posh. It turns out the two of them have become good pals since the Beckhams moved back to London this year, and have bonded over their mutual interest in fashion and Kate becoming a new mum. Naw, we hope a playdate for Prince George and Harper is being planned!

We knew they were on good terms as the Beckhams were invited to Kate and William’s wedding back in April 2011, but we thought it was just because of David’s friendship with William, as the two are known to be friendly ever since the 2012 Olympic bid and the failed FIFA World Cup 2018 bid. 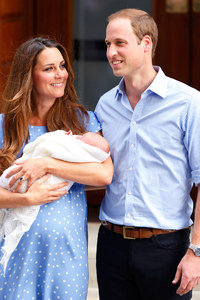 However, the ladies have allegedly been getting closer, and according to insiders they have been exchanging tips on managing crazy busy work schedules and parenthood.

A source told the Star: “The Beckhams and William and Kate are becoming very close and regularly discuss everything from parenting to decorating. Kate and Victoria have a lot in common as they both adore art and interior design.

“William and David enjoy discussing sport and bonding over being dads, and Kate and Victoria talk about fashion, designing and parenting.”

It seems about right to us that Posh spice should be best friends with Royalty, especially as she sat on a throne when she married David Beckham – they may as well be Royal themselves!

We’re hoping that Prince George and Harper become friends growing up as well – imagine how cute that would be!

Our future King spent his first Christmas with both sides of his parent’s family at the Sandringham Estate this year, and Kate and William arrived at church on Christmas morning and shared details of their day so far with little George.

According to The Mirror, Kate chatted to well-wishers about their Christmas Eve and morning with the little Heir.

Cicely Howard, 75, said: "She told me he was having a lovely day but was more interested in the wrapping paper than the presents."

William also said: "We've had a good morning with George and I can't wait until next year when he's bigger."

We would like to know what presents the Prince received? Diamond rattles perhaps? What do you think? Tweet us @sofeminineUK