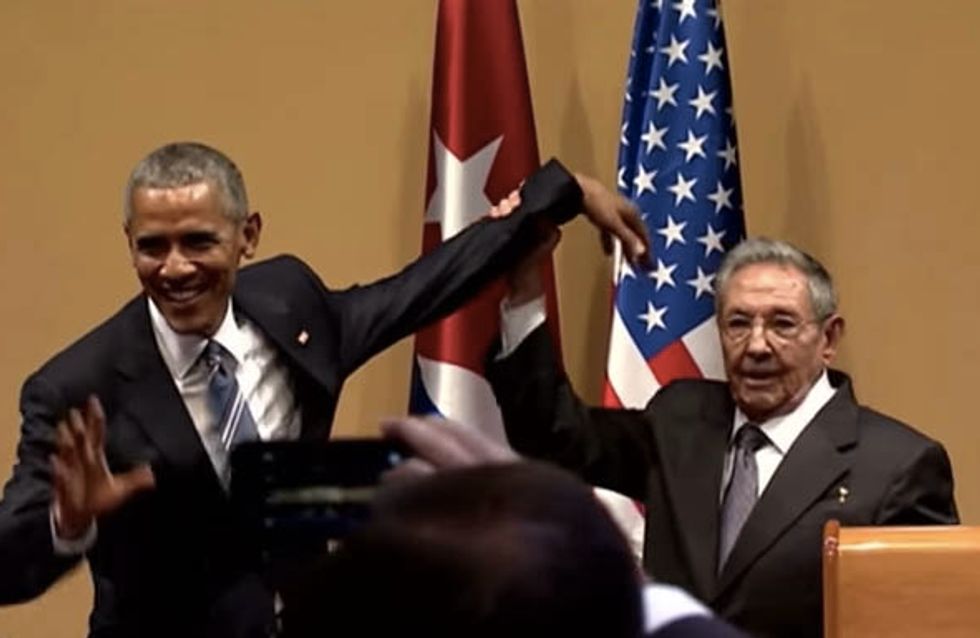 When Barack Obama met Cuban president Raúl Castro in a historic press conference, what started as a perfectly normal handshake between two prezzies turned into something totally weird. President Castro, for some bizarre reason, held Obama's limp arm up above his head as the American leader continued to wave and smile at the crowd. Was it supposed to be an homage to when the winner of a boxing match is announced? Who knows. Even Castro doesn't know.

What could have been a beautifully executed handshake between two powerful men was totally RUINED by Cuban leader Raúl Castro after he decided to shake up his greeting by lifting Barack Obama's limp limb high above his head and hold it there for a few seconds.

That awkward moment when a repressive Cuban dictator tries to get you to lift arms together w/ him (hint: go limp): https://t.co/g67PQyJbD9

Man, I bet those two were totally besides themselves with humiliation, but they needn't worry - their handshake faux pas is just one in a long line of extremely cringey celebrity greetings caught on camera. So Obamz, if you're still to this day doubled over at your oval room desk massaging your temple, cheeks burning with humiliation, Michelle patting you on the back saying "it wasn't....that bad....", then don't worry - we got you. Don't sweat it.

Watch these totes awks handshakes and then go get yourself a milkshake hun.

Kanye West wants to be known as the coolest guy alive, but unfortunately every time we close our eyes and think of Yeezy all that we see is this mortifying hug with John Mayer.

It's just two dads trying to be cool. Nothing more, nothing less.

Ryan Seacrest and a blind guy

This is almost too painful. What were you thinking, Seacrest?! It's a nightmare scenario, all caught on camera.

A hearty handshake from Joseph is rejected by Mr Merchant in front of a studio audience. Oh, and the millions of SNL fans tuning in live. Three red faces of the cringometer.

NOOO. If there's one person you don't want to leave hanging, it's the most beautiful member of the British aristocracy!

Hey, Bush, stop trying to kiss Condi all the time will ya? This pic in partic has got us so cringed out our bodies have seized up and now we're in need of a nice hot bath and a lobotomy.

Got any other cringy meet and greets you think should be added to the list? Let us know! @sofeminineUK

'Damn Daniel' Has Donated His Lifetime Supply Of White Vans​