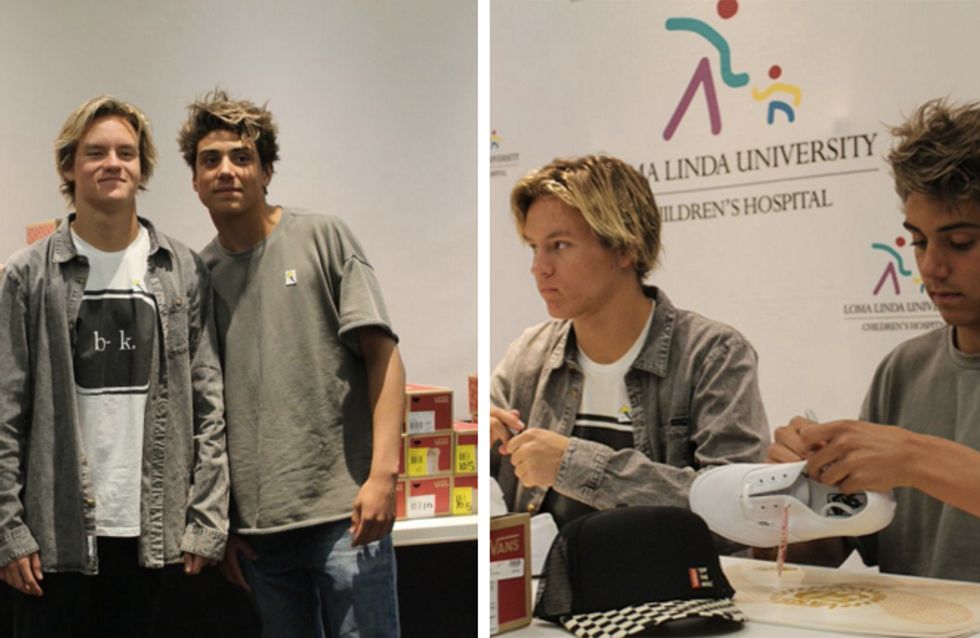 Damn Daniel, back at it again with the white Vans - literally! The worlds' favourite Daniel recently donated a whole bunch of brand new trainers given to him by The Ellen DeGeneres Show to a California children's hospital, making us love him even more.

Unless you've been living under a rock without a wifi signal for the past month or so, you've probably seen this video of Daniel Lara, filmed by his friend Josh Holz:

And perhaps even if you haven't seen it, you've heard people shouting "Damn, Daniel!" over and over again, because everyone loves a catchphrase.

Daniel and Josh appeared together on The Ellen DeGeneres Show after their video went viral, being shared over 350,000 times. Vans were quick to capitalise on the success of the video which features the catchy line "back at it again with the white Vans", and gave Daniel a supply of white Vans fo' life. Josh got an Ellen surfboard which definitely wasn't as good but still pretty decent.

The Ellen show was great!! Thank you guys so much @TheEllenShow pic.twitter.com/xTjhjg7Wft

Now, Daniel could have taken his white Vans and run for the hills. He could have lived a life of luxury with multiple pairs of clean trainers. But no. Damn Daniel is back at it again with the charitable giving!

Daniel and Josh took their new hefty supply of Vans and donated 100 pairs to patients at Loma Linda Children’s Hospital on 10th March, which was Josh's 16th birthday. The hospital tweeted to Josh: "You truly made our day and we are so happy to be able to be part of your birthday!!"

Thank you so much @LLChildrensHosp So happy we were able to donate Vans to our new friends! @VANS_66 pic.twitter.com/YZiWmiu1vz

It's been a busy time for the two unlikely celebrities - this week rock band Weezer released their music video 'California Kid' featuring the duo, and Josh was snapchatting live from the Divergent Allegiant premiere on Saturday.

What do you think of Damn Daniel? Is this totes cute or are you so over it? Let us know! @sofeminineUK