by Emmy Griffiths Published on 29 January 2015 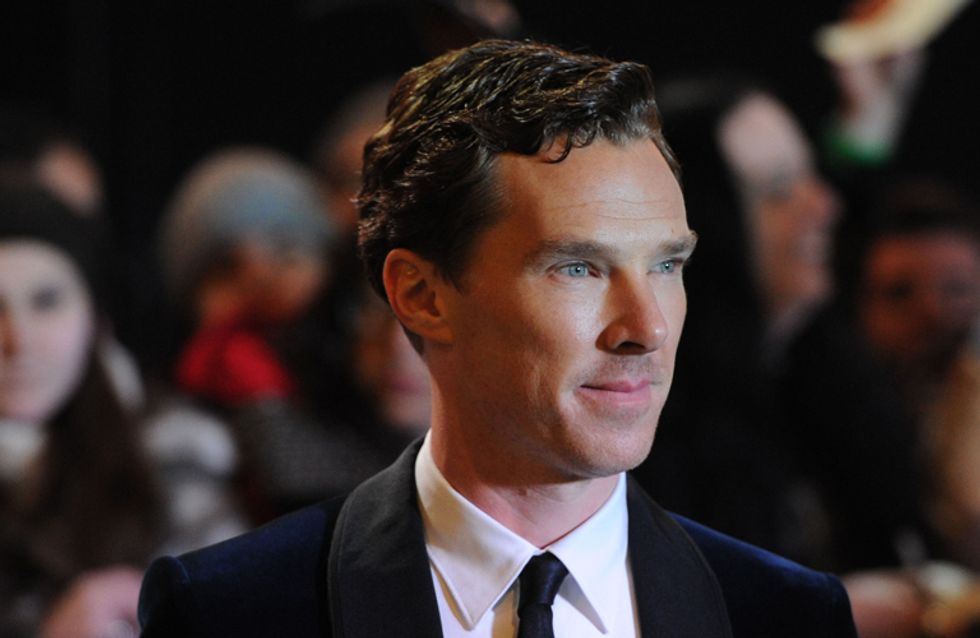 Benedict Cumberbatch is having a busy time at the moment, what with his many, many nominated awards, his new, lovely fiance Sophie Hunter and of course, the tiny little Cumberbaby on the way! We can't get enough of him so here's EVERYTHING we found that you may not know about everyone's favourite movie star...

Watch if you want to laugh until tears appear.

2. He has a deleted shower scene from Star Trek: Into Darkness

We’re all for naked Benedict, but this is so weird.

3. He is a registered wedding officiator

Want to be married by Benedict? He was legally ordained so he could marry his friends last year. Cute.

4. He was abducted in South Africa

When filming for miniseries To The End of the Earth, Benedict and a couple of his friends were abducted at gunpoint. He said: “They were like: ‘Look down! Look down! Put your hands on your head! Look at the floor! Where's your money? Where's your drugs?" recounted Cumberbatch. "And at that point, this adrenaline of fight or flight just exploded in my body. I was like, 'Oh f--k, we're f--ked."

5. He taught all about counting on Sesame Street

A mutation which explains why his eyes are the dreaming combination of blue, green and gold.

He called it “f***ing atrocious.” Boy’s probably got a point. #WhoStoleLordGranthamsShirt

8. During his gap year he taught English in a Tibetan monastery

“I could actually stay with monks in their home and watch them at work and at prayer, and get the chance to teach them and interact with them.”

Wow. We knew he was posh but, wow.

9. Apparently drunk Sherlock and drunk Benedict are one of the same

10. He considered becoming a lawyer

His parents didn’t want him to become an actor, and Benedict had originally planned to become a lawyer (before ignoring their wishes, obviously!)

11. He was once stalked by a fan who tweeted out everything he was doing

“I had someone live-tweeting my movements while I was in my own house. It was such a strange and a direct thing to see these tweets saying what I was doing as I was doing them…the sad thing is I don’t really have anonymity any more in the UK.”

12. He can actually play the violin

He had a week to learn for Sherlock, with his teacher Eos Chater saying: “Benedict had a week and made a surprising good sound. I have no doubt he would be a good violinist if he had the inclination.”

13. He was pranked brilliantly by Simon Pegg on the set of Star Trek

14. His most embarrassing moment happened at a Greek market

“I got stung by a wasp…a widow pulled down my pants, held me upside down and rubbed an onion on my bum.”

16. His ancestors owned slaves during the slave trade

The black curls aren’t Benedict’s favourite. He said: “I can’t think of a wittier or even accurate comparison, but I just think it makes me look a bit like…a woman.”

18. He appeared in Heartbeat. Twice.

Look at him he's such a teeny tiny baby!

20. His parents are both actors and play his mum and dad in Sherlock

Apparently he almost cried when he watched it for the rest time. Naw!

21. He does a great Alan Rickman impression

Come on and go back to your ginger roots Benedict! It will be SUCH an achievement for gingers everywhere!

She even appeared in an episode of Sherlock.

25. He once played Titania in A Midsummer Nights Dream

He was thirteen at the time.

26. He once pushed Mary off the stage whilst playing Joseph in a Nativity Play

He said: "[My first role was] as a very bossy Joseph in the Nativity play at primary school. Apparently I pushed Mary offstage because she was taking too long. Actresses eh!"

Apparently he would love to play Elvis in a movie. Please, Hollywood overlords, make it happen.

28. He has a collection of stuffed owls

According to the biography Being Benedict Cumberbatch, Benedict has a collection of stuffed owls in his room, probably as his mum has a bit of an obsession with them as well.

29. He has four godchildren

Sadly, you are not one of them. Neither are we. Sad face.

30. ​He nearly died when his sister left him outside in the snow as a baby

Not cool Tracey. Not cool.