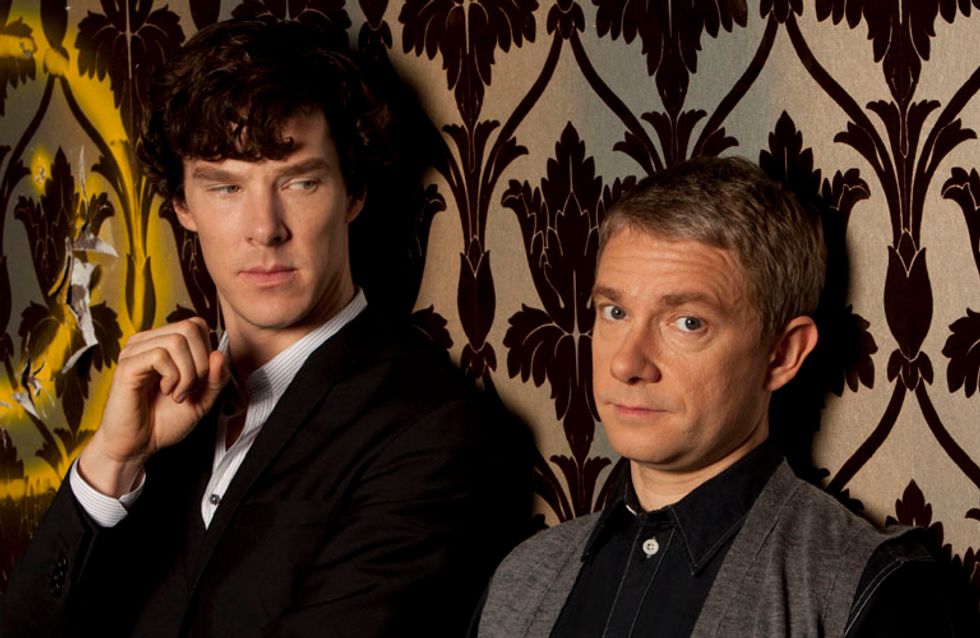 American telly is all well and good, but no one does dry humour, gristly drama and addictive sci fi shows quite like the Brits! Here are our top 20 favourite British TV shows that are a must watch!

Benedict Cumberbatch plays the high-functioning sociopathic consultant detective Sherlock Holmes, with Martin Freeman as his long suffering friend and roommate. The fast paced dialogue and consistently strong storylines (not to mention the cliff hangers) makes the show that made Benedict Cumberbatch famous at the top of our list.

Ricky Gervais’s masterpiece is a documentary-style comedy following the daily goings-on of office life. It sounds like it should be boring, but we’ve probably laughed and cried more at this show than any other on this list.

Aiden Turner plays the smouldering mine owner whose one true love is engaged to another. The storyline is slower than a lot of period dramas, but on the plus side Poldark takes his shirt off a lot. Like, A LOT.

This Irish comedy follows young Martin Moone and his imaginary friend as they navigate growing up in a small town in Northern Ireland. Created and starring Chris O'Dowd, it is sweet, fun and genuinely very funny.

Father-of-six Frank Gallagher drinks himself into a stupor as his children make the best of things on their council estate, with big sister Fiona as the head of the house. If you needed any incentive to watch this one, not only did the show receive critical acclaim, but James McAvoy is also in the first two seasons. Lovely.

A group of misfits including a posho, a rebel, a impulsive liar, a loner, and the typical boy and girl next door share a university house and become unlikely friends. It's good fun, and JP and Vod make it hilarious.

Caitlin and Caroline Moran co-wrote this hilarious coming-of-age show about too many siblings growing up in Wolverhampton, which is loosely based on the Moran’s own childhood. The teenage actors in the show are top notch, but it’s their mum Della (Rebekah Staton) who really shines as the tough-talking mother.

A bunch of college friends drink and do drugs whilst crashing cars into canals, dodging drug dealers and mind f***ing their friends. It’s funny, sad, absurd and tragic all at the same time.

A boy is found dead at the bottom of a cliff. Someone on the island murdered him. With secrets everywhere and no one to trust, this is a whodunit you NEVER see coming.

Merlin is every fantasy fan’s dream come true. This BBC series follows a young Merlin (less beard, more bowl cut) as he chills with Prince Arthur, controls dragons and keeps his powers on the down low. It’s good fun and all available on Netflix (added bonus)!

A bunch of young offenders get caught in a lightning storm, which gives them superpowers. It sounds terrible, but the ridiculous superpowers of their enemies (dairy control, for example), the crazy yet gripping storyline and the one and only character of Nathan makes this definitely worth the watch.

Mark and Jez are total opposites but BFFs who share a flat together and get dragged down by each other’s BS. The highlights of this show HAS to be Mark’s inward monologues of crippling self-doubt and pessimism. Any introvert will relate maybe a little too much.

This sort of weird but always funny sitcom about an IT department who hardly do any work and keep a goth in the cupboard is perfect for anyone with a slightly warped sense of humour. Particularly if you sport a nice tnetennba.

Four best friends aren’t total losers, but aren’t cool either get themselves into some truly horrendous situations (highlights include spray painting their crush’s driveway and hitting a disabled girl on the head with a Frisbee), and make us feel better about being normal human beings.

A man gets hit by a car and wakes up in the 1970s. Is he mad, in a coma, or has he actually travelled back in time? A little bit of sci fi makes this cop show totally original. Don’t even get us started on the soundtrack.

When Jamie Dornan wasn’t tying up women in his red room of pain, he was simply stalking and murdering them in The Fall whilst being pursued by ice-cold Detective.

When a cure is found for a zombie uprising in a little town of Yorkshire, the human residents have to accept their new zombie neighbours. This series finished WAY before it’s time, leading it’s fans to start a #renewintheflesh hashtag on Twitter.

We don’t want to go all fangirl, but -

What happens when you stick a British vampire, werewolf and ghost into a house in Bristol? We love American supernatural dramas and their penchant for melodrama, but a werewolf complaining that the ghost uses up all the mugs and so on is truly top TV.

Sure it’s been going on for fifty years and is kind of associated with being a bit lame, but Doctor Who has grown to be so much more from when a clunky metal dog was the height of ‘the future’. With crazy plot twists, awesome characters and a series reboot every time there’s a new Doctor, this is one show that’ll never get old.

The posh people and their servants get up to all sorts of tomfoolery in a large estate in England. There’s always someone hiding behind a curtain when secrets are spilled, and we’ve been hooked ever since that man died after having sex with Lady Mary.

Are there any you fancy watching? Tweet us @sofeminineUK!