Cara Delevingne and Rita Ora at war? 'Wifies' not speaking

Not long ago Cara Delevingne and Rita Ora were practically inseparable, but it's been some time since the besties were spotted together. It appears the pair have cooled their friendship since their embarrassing performance at the DKNY party last month.

Cara Delevingne and Rita Ora have reportedly fallen out since their embarrassing appearance at a DKNY party last month.

The pals were both on stage at the showbiz bash - but rather than let pop star Rita have the spotlight, Cara seemed to want all eyes on her.

The 20-year-old grabbed the mic off her "wifey" before grinding up against her during her scene-stealing performance.

Since then the once best friends haven't been seen together once.

The BFFs were so close at one point that Rita even wore a T-shirt with Cara's face on it - to the Burberry show the model was walking in.

But it seems there is now some serious distance between them.

The It girls have stopped messaging each other on Instagram and Twitter, where they used to declare their love for one another daily.

They have been enjoying very separate summers, with Cara ditching Rita's big gig at Wireless festival in London.

It was a pretty important moment for the 22-year-old, when she sang with Snoop Dogg and supported headliner Jay-Z.

Insiders claim it is Rita's career that caused the split.

A source told 3am: “There’s a lot of hurt on both sides but Rita’s been working towards her singing career and carefully crafting her image for four years and it was all in danger of being a joke after that shabby performance.

"Rita’s been advised to distance herself from the model.”

So where was Cara while Rita was wowing the crowds?

The blonde was spotted in Monte Carlo with Rita's rival Rihanna, 25.

Rita and Cara were both at Glastonbury - and were even camped just metres away from one another in luxury Winnebagos - but it looks like this was planned before the fall out.

The two partied separately for the whole weekend.

Rita has even named Stella McCartney her "new wife" on Twitter.

Tellingly she told GQ magazine who her real friends were in this month’s issue.

She said: “To me, I have my friends who I’ve known my whole life, and I can count them on one hand. They’re people I went to school with.

"Everyone else I meet from that point on, if they happen to become a friend, that’s incredible - come and join the family - but if not…”

What do you think - a childish squabble or the end of the friendship? Tweet us @sofeminineUK 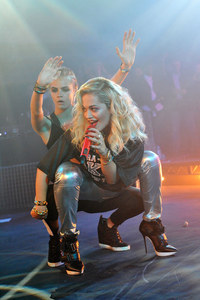 Francesca Menato
…
Feud
For all the best videos, memes and shareable news!