by Dagney Pruner Published on 8 May 2015 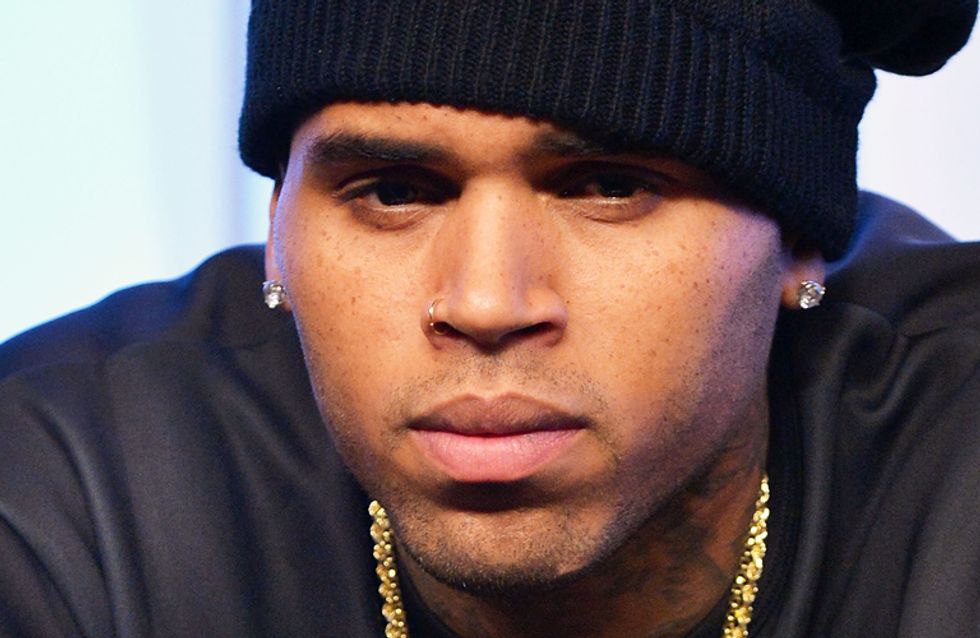 One downside of getting everything for free and having your face plastered over every magazine cover? You attract a lot of effing weird people who feel like they know you and want to birth your future children. Well, this stalker, who has horrible taste in stalkees, decided to take things one step further and break into Chris Brown's house last night. That's when things got WEIRD.

I can't believe I am going to say this, but Chris Brown was actually the "victim" of a home invasion last night. I put the word "victim" in quotations because you may remember that just earlier this week, Brown was cited with battery for beating a man at a pick up basketball game. So if you learn anything this week, it's that you DO NOT call out Chris Brown on a technical foul because he WILL sucker punch you in the face.

Well, evidently Chris Brown has never seen a cautionary tale I like to call The Bling Ring, because he found himself the "victim" of a home invasion last night when he came home to find this looney tunes b*tch in his house making herself quite at home.

"I get home and find this crazy individual in my house. She had broken the hinges off the doors. She found time to cook her several meals. She wrote "I love you" on the walls. She threw out my daughters clothing as well as my dogs stuff. Then had all these crazy voodoo things around my crib. Goes to show you how crazy people are crazy! And she painted her name on my cars!!!! I love my fans but this is some is on some real real crazy sh*t"​

So here are a few things we gathered from this breaking and entering situation straight out of a Reno 911 episode: first, this girl is one of the fastest cooks of all time, she found time to cook "several" meals while still having time to graffiti and vandalise Brown's house. I can see her now whipping up Top Ramen and Easy Mac all before Brown got back from his pick up basketball game nobody showed up to because they were afraid of being sucker punched in the face. Second, why is she in just a towel? Did she manage to make time for a nice aromatherapy bath between tagging Brown's cars and braiding voodoo doll's out of Karrueche Tran's weaves she left behind? Finally, this girl obviously went to Tyra Bank's school of how to look like you are fit for a straight jacket because this woman stopped mid rampage through Brown's house and struck a pose with this look. Just look at those eyes:

CAUSE SHE'S CLIMBING IN YOUR WINDOWS, AND SNATCHING YOUR EASY MAC UP

Let's just be grateful that poor baby Royalty wasn't in the house at the time. Given that her father has a mean streak that makes Mike Tyson look like a snuggly kitten, and the fact that she was SO CLOSE YETSO FAR from having RiRi as her mom, the poor girl is already going to be in therapy for years. Luckily those eyes won't also be there to haunt her in her dreams.

Do you think this was an insane as we did? Tweet at us! @sofeminineUK