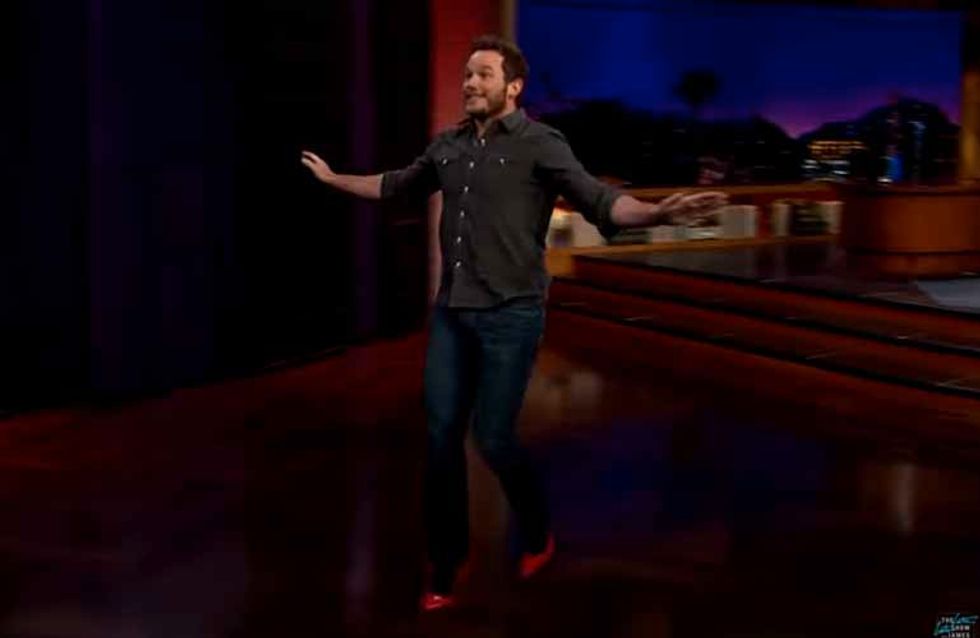 We couldn’t help but crack a smile at Chris Pratt as he more than lived up to the challenge of running in heels, looking fabulous as he did it!

Chatting on the Late Late Show with James Corden with his costars Bryce Dallas Howard and Jake Johnson, the group chatted about how amazing it was that Bryce run in heels in the movie (we actually feel ill at the thought of running from dinosaurs in heels. Seriously just take them off and try to use them as weapons…).

Chris praised Bryce, saying: “She did a phenomenal job and not just on hard surfaces, this is through the jungle in Hawaii and mud and she was a total trooper. She never once rolled an ankle or popped a knee.”

So when Chris was asked to try it out himself, we settled ourselves in to smugly watch the Guardians of the Galaxy try and fail the impossibility that is running in heels. However, we could NOT have been more wrong! We’re just going to put it out there, this is NOT the first time this man has rocked a pair of stilettos.

We’ve been a little annoyed at Chris Pratt this week, mostly due to his frankly weird philosophy when it comes to hunting animals, but that little leap back onto the platform has definitely reluctantly made me sort of love him again. Dammit Chris!

Does he do a good job? Tweet us @sofeminineUK

12 Things Men With Beards Are Sick Of Hearing