With all the talk surrounding Miley Cyrus and her performance at the VMAs, there was one person remaining very quiet on the matter - her fiancé. If there was anyone we'd imagine to have had a few reservations about the act, it's Liam Hemsworth. The actor has never courted media attention but even so, this was a big night for her - you'd think he'd have gone with her...

Liam Hemsworth was curiously absent from the MTV Video Music Awards this weekend.

Miley Cyrus stole the show thanks to her controversial twerking performance, but why did her fiancé choose to stay away?

Some believe he simply wanted to avoid the inevitable media hype that would follow.

Not to mention the audience cam that would've been pointed at him for the full six minutes of madness.

Nonetheless, some are wondering whether there's more to it than that.

Liam and Miley are rarely photographed together, but made an appearance side-by-side at the premiere for his new movie Paranoia earlier this month.

So, if she'll come to his premiere, why wouldn't he turn up to her big night at the VMAs? 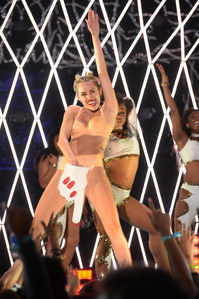 The 23-year-old, who proposed to Miley in May last year, has been upfront about his disdain towards her habit of courting the press.

He's often been reported to request she stays off Twitter and though he recently created his own account, he has barely used it.

Unsurprisingly, there has been no reaction from him after Miley's risqué performance.

After such a provocative and controversial stage show, it seems unlikely the Aussie would have been too happy with his The Last Song co-star.

Questions over their wedding plans have been rife for months.

Miley, 20, is often quick to deny any issues and has even recently appeared carrying bridal magazines.

A source told Hollywood Life: “Miley hasn’t talked about her wedding in ages, but she’s started getting excited about it again.

“She had a bride magazine with her the last time I saw her.

"As far as I know, there’s no date or any plans made but it seems like things are really back on track again for her and Liam.” 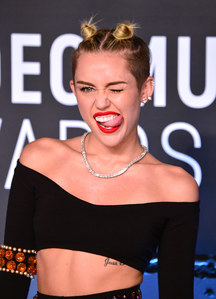 But Liam's absence at the VMAs, teamed with their apparent behaviour at the premiere on the 8th August, has left a lot of people sceptical.

An eyewitness claimed things were pretty frosty at the event.

They explained: "Liam’s family was there to support him, but they completely ignored Miley when she was there.

Doesn't sound good to us...What do you think, super private or heading for splitsville? Tweet us @sofeminineUK 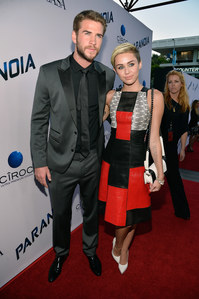