Lea Michele has had the hardest few months of her life. In July she lost her boyfriend and Glee co-star Cory Monteith to a shocking overdose of heroin and alcohol. Clearly still grief-stricken the 27-year-old stepped out last night at the Elle Women In Hollywood event, which honoured Penelope Cruz and Reese Witherspoon, looking worryingly and painfully thin.

Lea Michele is still grieving for the loss of her boyfriend Cory Monteith, who died on July 13 due to a reported overdose of alcohol and heroin.

His death sent shockwaves through Hollywood and deeply affected all who worked with the Canadian actor on the set of Glee.

But no one was more devastated than his girlfriend of a year and half, and still three months later the physical toll on Lea’s body is clear to see.

Looking painfully thin, the Glee star's dramatic weight loss was evident from her gaunt figure and tiny waistline, leaving many worrying about the health of the young actress.

The Glee star has thrown herself back into work since the tragedy, putting on a brave face to the public and even continuing to film the hit TV show, which recently aired a tribute episode to Cory and his character Finn Hudson.

A source revealed to People magazine earlier this month that Lea, who dated Cory for two years, “still misses him every day” and “talks about Cory all the time.”

During this difficult time the actress has leant on friends and family, especially her Glee castmates and show creator Ryan Murphy.

The insider added: “She doesn’t like to be alone. Her friends have really been helping her through it. It's getting a little easier.”

Rather than show up to the Elle event solo, Lea brought along a girlfriend for company, posting a snapshot of the pair of them and writing: “Me and my date Estee Stanley.”

“She really struggled. It was hard to get up every morning,” a friend tells People. “But now, she's doing okay.”

Poor Lea! We wish her all the best.

Do you think Lea looks too skinny? Tweet us @SofeminineUK. 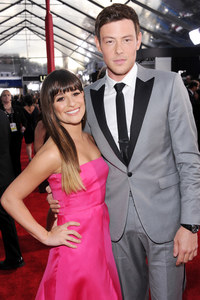 by the editorial team
+
All the news about Lea Michele