Lea Michele was holidaying in Mexico with Cory Monteith before he flew to Canada where he later tragically died. An interview with the actress has now emerged from just days before her boyfriend's death. It makes for a heartbreaking read as she gushes over him as both her partner and co-star.

A heartbreaking interview with Lea Michele gushing over her boyfriend Cory Monteith has emerged.

As the couple were taking in the sun in Mexico, Lea had a shoot and interview with the country's Marie Clare magazine.

The 26-year-old Glee star told the mag, in no uncertain terms, just how much she loved and adored her boyfriend of two years.

She said: "He is the best person I know, he has made my life so incredible, and I am so thankful for him and not only to have him as a partner but also as a co-worker.

"It is important to have someone that supports you and encourages you, someone that makes you feel that you are unstoppable, that you can do anything in the world because you have him."

She continued: "It's more interesting having a relationship with someone you work with because we get more attention because we play boyfriend and girlfriend on the show and we are also in real life."

The pair were so close that Cory even visited Lea on set of the shoot, which took place on 7th July.

The happy couple enjoyed lunch together and the magazine's editor Ariadne Grant said: "He showed up in great spirits.

"They were very nice and obviously happy and in love."

She added: "We are very disrupted by the unfortunate and untimely events. Our thoughts are with Lea."

Just days later, on 13th July, the man most famous for playing Finn Hudson in Glee was found dead in his hotel room.

It was later revealed he'd "died of a mixed drug toxicity, involving heroin and alcohol".

Since Cory's passing, Lea has remained close to his family in making arrangements for the funeral.

A statement in People magazine read: "Lea is deeply grateful for all the love and support she's received from family, friends, and fans.

"She has been grieving alongside his family and making appropriate arrangements with them.

"They are supporting each other as they endure this profound loss together."

It concluded: "We continue to ask the media to respect the privacy of Lea and Cory's family." 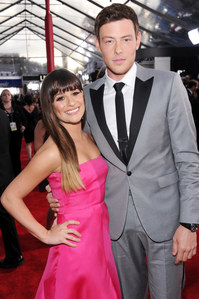