Halle Berry gave birth to a healthy baby boy in Los Angeles on Saturday. It’s her first child with her third husband Olivier Martinez, whom she married in Burgundy, France, last July. The 47-year-old Oscar-winner already has a five-year-old daughter Nahla with her former fiancé Gabriel Aubrey.

Halle Berry and Olivier Martinez are celebrating the birth of their first son together, after the actress welcomed her second child into the world on Saturday.

Like many other A-list celebs, Halle delivered the baby at Cedars-Sinai Medical Centre in Los Angeles.

Halle Berry not dumped over age gap
Halle Berry's ex-boyfriend, Gabriel Aubry, denies her age is the reason they have split.

A representative for the Die Another Day star confirmed the happy news on Sunday, although so far the name of her little bundle of joy has not been revealed.

Halle already has a daughter, five-year-old Nahla, from her previous relationship with Canadian model Gabriel Aubry.

The Catwoman star earlier admitted that she was thrilled to be pregnant again, calling the newest addition to her family a “miracle” due to conceiving so late in life.

The S.W.A.T. actor was also excited to become a first-time dad, revealing to People magazine their plans to raise their child in the US rather than in his native Paris.

The 47-year-old said: “My son will remain an American, but I will remain French. I remain a Frenchman in America, but I adapt to American culture.”

The day before Halle had been spotted looking ready to pop at dinner in West Hollywood after having dinner with her French hubby.

No doubt Halle is going to be busy over the coming months, because as well as being a mum to her two little ones, she’s signed on to star in a serialised TV drama called Extant.

The 13-episode thriller is set to air next year on CBS, and the Monster’s Ball star will play an astronaut reconnecting with her family after spending a year in outer space.

Congrats to the A-list couple! With parents as beautiful as Halle and Olivier, we bet her son is going to be a real looker!

After calling her first child Nahla, do you think Halle is going to choose an equally unusual name for her baby boy? Tweet us @SofeminineUK! 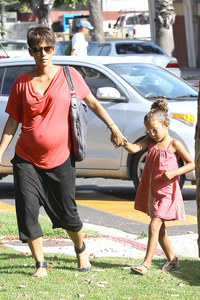 by the editorial team
+
All the news about Halle Berry

Alison Potter
…
Baby
For all the best videos, memes and shareable news!