by Alison Potter Published on 1 November 2012

Gwen Stefani’s baby bump has gone viral
This isn’t Gwen’s first baby bump, but we must say she is looking better than ever! Just days after announcing her pregnancy, the No Doubt singer took a sexy selfie, wearing a skintight black outfit and heels. After posting the picture on Twitter, fans everywhere are gushing over the star’s glowing maternity bod and the new little tyke on the way.

Smiley Holly Willoughby is the nation’s sweetheart on This Morning with her cute little tea dresses and inoffensive manner.

But last night at Jonathan Ross’ annual Halloween bash, the 31-year-old couldn’t have looked further from her normally gorgeous and flawless self.

The Celebrity Juice panellist looked terrifying - it seemed as if her face had been unzipped revealing red raw skin and a half-destroyed nose underneath. 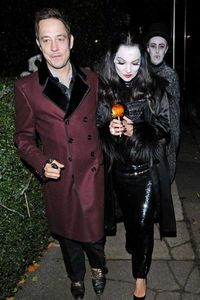 Also at the bash was Kate Moss and her rocker husband Jamie Hince, who had dressed as Morticia and Gomez Addams from The Addams Family.

No Doubt singer Gwen Stefani managed a more original costume, turning up to the bash with her bandmates as a zombie Sandy from Grease.

She was the spitting image of Olivia Newton-John with her blonde curls, Pink Ladies’ jacket and tight black shiny trousers...except there was blood running down one side of her carefully made-up face.

Jonathan Ross certainly knows how to throw a party and the raucous star-studded bash was full of celebs in scary get-up.

8 Out Of 10 Cats host Jimmy Carr looked positively terrifying as a ventriloquist dummy, and in his arms he carried a smaller, uncannily similar version of himself.

This year Jonathan Ross went all out with impressive Halloween decorations and terrifying performers for his showbiz bash, transforming his Hampstead house into a haunted castle with a scary dungeon.

Although the chat show host had made a big effort for the party, at the actual event his outfit was one of the more disappointing of the night as he wore a stereotypical Count Dracula costume.

Next time perhaps the TV presenter could get some outfit ideas from his friends!

by the editorial team
+
All the news about Gwen Stefani