by Emmy Griffiths Published on 27 August 2014 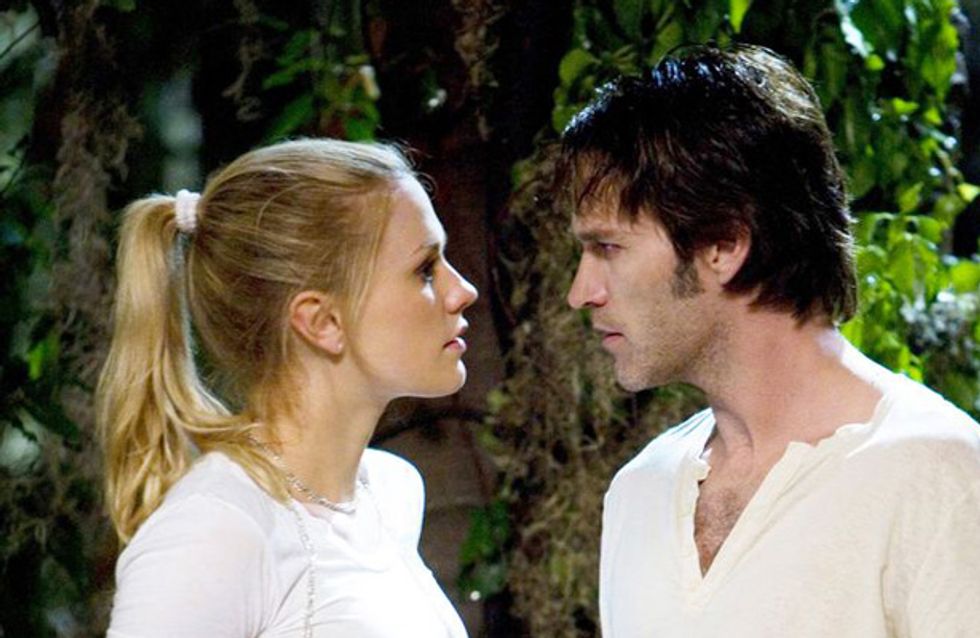 ‘Ugh’ – the sound every single Trubie, occasional watcher and ‘I-just-ended-up-flicking-onto-this-by-accident’ viewer made at the end of the last ever True Blood episode, titled ‘Thank You.’ You know what, HBO? You’re not welcome. Because this shadow of its former self show couldn’t even deliver for it’s season finale. This could rival Dexter as being the worst ending to a show EVER. Here’s how we think it went wrong…

Lafayette wasn’t even in it

The only shining light left in True Blood’s never-ending night was Nelsan Ellis’s cook/medium/fake eyelash wearing Lafayette. Despite surely being the show’s strongest asset BY A MILE, he was nowhere to be seen in this episode. Why. WHYYYYY. Let’s just look back to the glory days and smile. What else can we do?

We never expected the screenwriters to give into the fandom and land Sookie with the most popular of the two leading men. But we did expect them to choose one, and stick to it. Sure, it defied expectations when the end scene saw Sookie preggers and enjoying dinner with a faceless brunette man, and we sort of understand that we didn't really need to know who it was, but again it begs the question of what was the point? Why did we even get invested?

There were some long, unnecessary scenes we didn’t need/want

A ten-minute scene of Sookie chatting the breeze with Reverend Daniels? No, no thank you. Move on. We could have been spending this time with Eric. Or Jess. Or Lafayette. Basically anyone else but these two.

Jessica ends up with Hoyt and it’s a total shame

In an earlier season, Hoyt becomes a grouchy pants, Jessica falls out of love with him, and he goes off to Alaska like a little wounded puppy after he makes Jess glamour him to forget all about her. SO, after all this time Hoyt shows up like three episodes before the end, and we are supposed to be happy that she settles back in with the man she was so stifled by two seasons ago? UGH.

The vampires in True Blood were always meant to be an analogy for LGBT rights, right? Like when they ‘came out of the coffin’ initially and fought for marriage equality. Even the opening title shows a church sign that reads: “God hates fangs”, CLEARLY a metaphor.

So when Bill chooses to die rather than continue living as a vampire, a lifestyle that he considers a curse that ruins lives, isn’t his rejection of his true nature kind of sort of REALLY offensive, especially since we’ve been watching this civil rights allegory for seven seasons now and know how it works?

The last scene was TOO sickly sweet

The show wanted to end on a good vibe, sure. Thing is, True Blood in its golden age was all about twisted shocks and wicked cliff-hangers, and that's what made it so freaking watchable. So when True Blood ended with everyone sat down having an outdoor dinner party, it was so, so Disney. And disappointing.

Bill never got a happy ending

All angry destroyed metaphors aside, no one wanted this for Bill. Yeah, he went a bit crazy that one time he became Billith, but more or less from season one he has been the romantic hero we were all rooting for, the Mr Darcy of the piece. So to have the love of his life stake him as he lay in his coffin from the 1800s wasn’t just sad, it was completely stupid and disrespectful to the viewers who had been watching their relationship develop for, oh, the last SEVEN YEARS.

If his death had made sense, it would have been one thing, but to die so Sookie could have a happy normal life was totally illogical. Writers, what were you thinking please?

Jason ended up with whatshername

Sure it was nice to see Jason settle down with someone, but couldn’t it have been someone, anyone, that we’d known for more than two episodes? How could we have rooted for this relationship?

So Tara’s totally over and done with then?

Tara’s character had a rough ride throughout True Blood. She started off as the best of the bunch, then suffered due to dull-ass plotlines, but then immediately become fascinating again when she was turned vampire. So a quick stake through the heart in season seven, episode one and a stupid, pointless ‘ghost’ storyline and she’s done? No tying up loose ends with Pam, or Sookie? This was mishandling of characters at its WORST.

Eric and Pam’s storyline was totally separate from the others

Instead of some insane, incredible storyline that brought all of our heroes together, Eric and Pam sort of hung out by themselves killing Japanese businessmen whilst everyone else twiddled their thumbs and waited for their scenes. LAME.

Okay, rant over (for now). We should say that not everything was bad in the finale though (just almost everything). Here’s what we think the show did right.

Sookie finally accepts herself for who she is

Sookie has always felt cursed by her cutesy fairy powers and if we had time to put together every time she says ‘I just want a normal life’ from season one through to seven we’d have a three hour video on our hands. However, in this episode she finally accepts that she doesn’t want to let go of who she is, because it is part of what defines her. HELL YEAH SOOKIE. If only Bill took note and climbed the hell out of that coffin. Gah.

Pam and Eric were naturally hilarious

Despite the storyline being WEAK, Pam and Eric’s infomercial at the end to sell ‘New Blood’ was probably the funniest and most classic True Blood moment of the episode. These two have always been perfect together, so it least that wasn’t wrecked. Pop open a bottle of Prosecco and celebrate writers! You didn’t screw this one tiny little aspect of the show up! (Sorry, we’re very bitter).

Sarah Newlin got everything that was coming to her

Sarah Newlin ended the show chained in Fangtasia’s basement as wealthy vampires spent thousands for a minute with her like some sort of blood slave as she was taunted by the ghosts of her past, and it was way satisfying. See it all here…

Did you love or hate or feel nothing towards the True Blood finale? Tweet us @sofeminineUK

This article was (angrily) written by Emmy Griffiths. Follow her @emmyfg!

Tom Hiddleston And The Other Hottest Vampires To Grace Our Screens