Tuesday night Kate Middleton had babysitting duties, as dad Prince William partied the night away at the Winter Whites Gala with Taylor Swift and Jon Bon Jovi. But now the Duchess of Cambridge is leaving baby George in the capable hands of daddy Wills so that she can have a much-deserved glam girls’ night out! It’s time for Kate to let her glossy brown hair down!

Kate Middleton has been a dedicated parent to baby George since giving birth in July, but like every new mum she deserves a night out every now and again.

The 31-year-old is planning to put on her glad rags this evening, as she’s the guest of honour at the annual gala dinner for her charity SportsAid.

Like most Kate Middleton obsessives, we can't wait to see what glamorous dress the young royal picks out to wear for the glittering ball – although we can pretty much guarantee it’s going to be a showstopper!

While Kate’s night probably won’t include a sing-a-long to Livin’ On A Prayer with Taylor Swift and Jon Bon Jovi like Prince William’s most recent night out, it’s definitely set to be an unmissable event.

Kate is set to be joined by a whole host of exceptional British Olympic and Paralympic athletes, to honour the next generation of up-and-coming British sports stars.

The Duchess of Cambridge is a patron of SportsAid, which means that like her hubby Wills at the CentrePoint charity event, Kate will be required to get up on stage for presenting duties.

One of the awards is set to be the coveted One-to-Watch award, which singles out a young British sportsman or sportswoman who has demonstrated an exemplary commitment to their sporting career.

Teen pin-up and Olympic Bronze medal-winning diver Tom Daley was a previous recipient of the award.

The SportsAid gala will be one of the few royal engagements that Kate carries out before she reportedly turns her focus on spending Christmas with her family and four-month-old George.

Previously Prince Harry has admitted that George is a bit of a screamer, so it sounds like dad William will have his hands full tonight!

Are you excited to see what Kate Middleton pulls out of her wardrobe tonight? Tweet us @sofeminineuk! 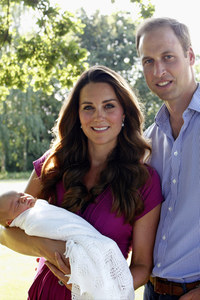