Kim Kardashian’s butt photo caused an online media storm. But while many people are still angry at the new mum and reality star’s supposed ‘inappropriate’ behaviour, model Kelly Brook has sent up the whole situation by posting her own bum pic – except that she admits her derriere had to be digitally-enhanced so that it resembled Kim-K’s bootylicious behind. Check out the Photoshop skills on Kelly!

Keeping Up With The Kardashians star Kim recently uploaded a flattering photo of her post-pregnancy body in a particularly tight white swimsuit.

While many debated whether or not it was appropriate for the new mum to be posting such raunchy snaps, Kelly Brook thought she would give it a go herself.

But sadly seeing as she’s somewhat lacking in the booty department, Kelly digitally-enhanced her ‘belfie’ – short for bottom selfie – so that she had a much more rounded Kardashian butt.

Roking a pretty similar pose, the 33-year-old model uploaded the pic to her Instagram account and wrote: “@kimkardashian I've seen that shot somewhere before HA!!”

The Celebrity Juice presenter then posted a before-and-after comparison of the same shot, which was taken on a swimwear shoot in Cape Town, South Africa, back in April 2012.

The two pics highlighted just how doctored the image was to mimic Kim’s cheeky snap from last week, and Kelly quite rightly credited Kanye West’s girlfriend for giving her the idea, commenting: “Inspired @kimkardashian.”

Kelly is the latest female star to post a ‘belfie’ and in recent weeks Kesha, Lady Gaga, Rihanna and Beyonce have all had their butts on show.

But so far only the Kent-born model has admitted to digitally-enhancing her booty for maximum effect.

What do you think of the latest celebrity craze of uploading bottom-baring pics? Tweet us @SofeminineUK! 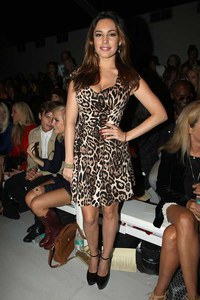